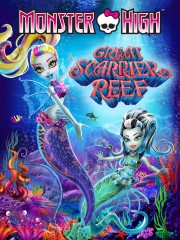 The girls from Monster High are kidnapped through magic and turned into underwater mermaid ghouls under the control of a newly appointed underwater goddess. The goddess has plans for the girls that they will have to accomplish before they are sent back home.

"Things are not always as they seem."

William Lau, director of five Monster High movies, ten Barbie movies, and various other animated films and television series such as Hot Wheels, Max Steel, and Beast Wars, delivers Monster High: Great Scarrier Reef. The storyline for this picture is very mediocre with fewer life lessons and worthwhile moments than some of the previous films in the series. The animation is very clean and well done.

"I thought cats always landed on their feet."

My daughter adores this series and we watched most of them off Netflix. This one was recently released so we grabbed it from Red Box and she loved it as much as the previous films in the series. I thought this was a step down and fairly mediocre. I wouldn't go too out of my way to see this.

Jimmy H
½ April 4, 2016
Great for the next teener or tweener girls pajama party. Perfect for ages eight to 18. Young girls will enjoy it.