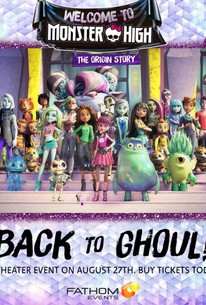 See how it all began when Fathom Events, Mattel and Women's Forum present Welcome to Monster High(tm) in movie theatres nationwide for a spook-tacular one-day event on Saturday, August 27! Monsters once lived in hiding-even from each other-because they were afraid they would be in danger if humans knew they existed. But Draculaura(tm), the daughter of Dracula, along with her best ghoulfriend Frankie Stein(tm), daughter of Dr. Frankenstein's Monster, dreamt of a school where everyone was welcome and accepted for who they are. Along with Draculaura(tm) and Frankie Stein(tm), this one-day event features the revamped looks of your favorite ghoulfriends, including Clawdeen Wolf(tm), Cleo de Nile(tm) and Lagoona Blue(tm)!

There are no featured audience reviews yet. Click the link below to see what others say about Monster High: Welcome to Monster High!