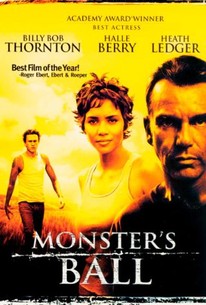 Critics Consensus: Somber and thought provoking, Monster's Ball has great performances all around.

Critics Consensus: Somber and thought provoking, Monster's Ball has great performances all around.

Critic Consensus: Somber and thought provoking, Monster's Ball has great performances all around.

Director Marc Forster, winner of Best Feature at Slamdance for his debut film Loungers (1996) and the "Someone to Watch" Independent Spirit Award for his indie drama Everything Put Together (2000), follows up those acclaimed projects with this intense, racially charged romance. Billy Bob Thornton stars as Georgia prison guard Hank Grotowski, a hard-drinking racist ex-cop whose father, Buck (Peter Boyle), is dying of emphysema and whose son, Sonny (Heath Ledger), works the execution detail at the prison's death row. When Sonny commits suicide, Hank is devastated and quits his job, spiraling into a deep depression until, one night, he comes to the aid of Leticia (Halle Berry), a beautiful African-American woman whose son, Tyrell (Coronji Calhoun), has been hit by a car. When Tyrell dies, Leticia and Hank find themselves to be unexpected soul mates linked together by tragic grief. It's not long before Hank discovers that Leticia is the widow of Lawrence Musgrove (Sean Combs), the man whose execution by electric chair he and his late son helped to orchestrate. Monster's Ball (2001) is based on a screenplay by actors Milo Addica and Will Rokos, who spent five years developing their script into a feature. Their title refers to the name of an English tradition requiring jailers to throw a party for a condemned man on the night before his death. ~ Karl Williams, Rovi

Will Rokos
as Warden Velasco

Leticia and Hank come together in their grief, and when they do - when, in particular, they seek some kind of punishment and absolution in sex - it makes for one of the most intense, moving and real moments you're ever likely to witness on film.

This brutal movie is for adults only.

It's not a polemic on the death penalty, race relations or family dynamics. It's a character study that really sticks with you.

A serious movie made by seriously talented people, and I never quite came 'round to it.

A textbook example of fearless filmmaking, exhibiting a brand of gritty realism that's hard to watch but impossible to ignore.

Though marred by script that telegraphs its messages, this drama still manages to tell a compelling love story betweenn a redneck guard and a black widow, well played by Billy Bob Thronton and particularly Halle Berre, who should get Oscar nomination

Forster makes us too intimate with these characters. But, heavy-handed and derivative as it is, its lead actors strike some resonant chords....

Thornton and Berry show us what acting is in this movie.

Recalls Tender Mercies, another astutely acted character study that remained resolutely small-scale and was all the more affecting because it didn't overreach.

Much of the film works, performances all around are better than the script, and the whole (especially the first part) is well directed by Marc Forster.

Not for everyone, this work requires thought and involvement, leaving those desirous of spoon-feeding disappointed. Excellent performances highlight this serious film that questions our propensity to simplify, to label things, situations, and especially people (including ourselves) in order to 'quickly understand' problems. Eye-opening and unforgettable.

This serious character study nor the performances managed to keep me engaged. Found it utterly boring & frustratingly slow. Not sure if I'll ever grow up enough to be able to appreciate such works if at all they deserve it.

Halle Berry's Oscar win for this one was well-deserved and more. The film itself is heart-wrenching for me. It is through loss and grieve that these two main characters find each other. Both of them are so beautifully tragic and so brilliantly interpreted by these two great actors. Quite somber but a must-see.

A film this emotional, and working in every way, is extremely hard to come by these days, because filmmakers usually do not pay close enough attention to the little details in creation a true human drama. Billy Bob Thornton and Halle Berry give the performances of their careers and the supporting cast of Heath Ledger and Sean Combs really holds up as well. Everyone brings their A-Game to this picture and it really does show. As an ex-cop falls for the wife of one of his death row inmates, death comes around every corner and the film becomes very hard to watch, with not many happy moments, if any. It is perfectly editing, the direction is immaculate, the script is far more than suitable for this particular subject, and the score of the film fits better than anything I have seen in a long time. "Monsters Ball" is easily one of my favourite films.