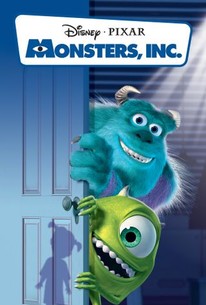 Critics Consensus: Clever, funny, and delightful to look at, Monsters, Inc. delivers another resounding example of how Pixar elevated the bar for modern all-ages animation.

Critics Consensus: Clever, funny, and delightful to look at, Monsters, Inc. delivers another resounding example of how Pixar elevated the bar for modern all-ages animation.

Critic Consensus: Clever, funny, and delightful to look at, Monsters, Inc. delivers another resounding example of how Pixar elevated the bar for modern all-ages animation.

After exploring the worlds of toys and bugs in the two Toy Story films and A Bug's Life, the award-winning computer animation company Pixar delves into the realm of monsters with its fourth feature. Hulking, blue-furred behemoth James P. "Sully" Sullivan (John Goodman) and his one-eyed assistant Mike Wazowski (Billy Crystal) are employed by Monsters, Inc., a scream processing factory. It seems that the denizens of their realm thrive on the screams of kids spooked by monsters lurking under their beds and in their closets. It's the job of Sully, Mike, and their co-workers, including sarcastic Randall Boggs (Steve Buscemi), crab-like CEO Henry J. Waternoose (James Coburn), and lovely snake-headed receptionist Celia (Jennifer Tilly) to keep the frights flowing. When Sully and Mike are followed back into the monster world by a very unafraid little human girl named Boo (Mary Gibbs), they are exiled to her universe, where they discover that such a modern-day mythological specimen as the Abominable Snowman is a fellow refugee. ~ Karl Williams, Rovi

Jeff Pidgeon
as Bile
View All

The uses of enchantment haven't changed; kids still need, maybe more than ever, the special comfort of fabulous threats they can control.

It's a terrific piece of work: smart, inventive and executed with state-of-the-art finesse.

If anything, it improves with age.

It's in the visuals that 'Monsters Inc' comes to life, from the jazzy, Norman McLaren influenced opening to the hilarious, shakycam amateur-dramatic recap over the closing credits.

Another chance to see Pixar's most dazzling premise, now spruced up with a third dimension.

A fun, fast-paced story with plenty of wit and brightly colored eye-candy.

Pixar continues to set the standards for which all other animation projects attempt to reach.

It's funny, the characters are endearing, the monster world is cleverly developed, and the Pixar gang really has fun with this one.

This was only Pixar's fourth film but you wouldn't think it, the visuals on display here are pretty much top of their game even by today's standards. What is so perfect about this particular film is like 'Toy Story' the premise is incredibly simple and derives from everybodies childhood. This is what makes 'Monsters' and the Buzz Lightyear adventures so utterly perfect, they touch on everybody's memories, no one can say they can't relate. Think about it, the plot is so damn simple its genius! monsters that supposedly live in your closet, that's it! Everybody knows of those deep dark places that brought a sense of dread when you were a sprog, under the bed, behind the curtains, in the cupboard, the closet, in the attic or cellar etc... The way this simple idea is fleshed out I like very much, admittedly I may have gone a different route by not using such a factory line based company idea for the monster setup. That's the one thing I didn't really get on with here, I didn't really enjoy the harsh metal surroundings the monsters live in, seemed to cold and sterile, almost alien not monster, kinda too me out of the moment. Visually its epic, in some aspects, others its more standard, the character of Sulley easily being the most impressive thing going with that blue fur of his (mega merchandise planning of plush toy sales there methinks). I only wish they had stayed a bit more spooky n kooky with the monster world instead of that rather bland clean direction, and 'Monstropolis' which merely looked like a regular US city! what a waste! man I had some ideas for that. Likewise the characters went from excellent to meh for me. Of course the main two guys are perfect and their voices are pitch perfectly performed by Crystal and Goodman. Other monster creations are nice but lacked the same kind of horror element. Randall (brilliantly voiced by Buscemi) for instance is just a lizard/chameleon whilst Celia Mae seemed to merely be 'Medusa' which was rather unimaginative. There also seemed to be too many generic looking characters if you ask me, blobs and tentacles etc...I would of loved Tim Burton's angle on this. Gotta be honest I also felt like I was shoved out of the moment when the plot introduced 'Boo' the human child. Now I know this is the basis for the entire plot and it is for the younger generation of course but I just thought the whole thing went way too schmaltzy. The little kid was disgustingly cute to point where I really disliked the character and wanted to vomit. Towards the end as we hit the finale the film does tend to go into a frenzy of fast paced action, it does get a wee bit too frenetic and hysterical as the characters are bounding through door after door. Again its a nice idea but kinda goes a bit too far and takes you out of the moment, you feel tired just watching it. I think this film is definitely aimed more for the kids, sounds dumb I know but some of these CGI flicks are more universal and can be enjoyed by all ages. This film is the same in that sense but I think its much more kiddie orientated especially with the sweet relationship that builds between Boo and Sulley and the heartfelt ending. I did expect a bit more sarcasm from Crystal with his character but he seemed reigned in a bit to me, clearly a sign its more for the kids this time.

After toys and bugs, Pixar came up with this adorable animation that, even if not exactly an instant classic as the company's better works, is a whole lot of fun and a visual treat for all ages - including adults, who will find it equally funny and irresistible.

"Monsters Inc." is the type of film that no matter how old you are, the kid deep down inside you will love it. It's not just one of Pixar's best films yet, but one of the best kids films out there to date. It's fun, educational, kind of thrilling in a way, and will have you crying and smiling throughout, due to cuteness and relatability. The animators of this film take everything into account, making this look gorgeous inside and out, down to the very last hair on the Monster's bodies. The story of Monster's working to be what Monster's are known to us humans to be in a fairytale is quite amusing. It's written perfectly with just the right number of jokes and subtle moments, and the screen time of everyone is timed perfectly. I love every second of "Monster's Inc." It's definitely one of the best animated films out there!