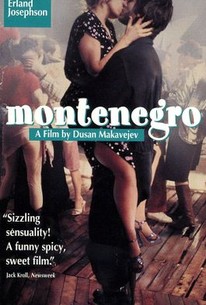 In this film, Susan Anspach, an American housewife living in Sweden, is at a loss to understand her topsy-turvy household. Left to her own devices, Anspach has an affair with a shovel-wielding barroom brawler and befriends a young girl who smuggles liquor and dead animals from behind the Iron Curtain.

Per Oscarsson
as Dr. Aram Pazardjian

A virtuoso demonstration of cinematic facility which adroitly masquerades as a witty, pungent evocation of a woman's fantasy life.

If it begins deceptively, as though setting out to be your typically angst-ridden Swedish art movie, by the time it's reached its set of climaxes,Makavejev's film could not have strayed further from the beaten track.

There can be something absolutely liberating about a movie that makes up its rules as it goes along.

A paean to the liberating power of dirt, as in both grime and smut.

Makavejev's trajectory tries too hard to be modern and yet, it never manages to be in tune with the spirit of the era. [Full Review in Spanish]

Cleverly edited, with breaks of raw humor often short of slapstick, the film carefully avoids the macabre and the inane, treading on safe ground. [Full review in Spanish]

The first half of Montenegro seems to be a parody of Ingmar Bergman films, where characters wallow instead of doing anything about their problems. It's no accident that director Dusan Makajevev cast Bergman-regular Erland Josephson as the miserly husband.

The screen's most good-natured slaughter of familial order

Weirdly entertaining black comedy, that's not for all tastes.

This funny and subversive film is by no means as unwatchable as some people have made Makavejev's work out to be.

A dish for the discerning palate.

Upon hearing "Montenegro"'s thumbnail plot (essentially, "Bored Housewife Gone Wild"), I anticipated writer/director Dusan Makavejev -- creator of the insanely hedonistic "Sweet Movie" and "W.R.: Mysteries of the Organism" -- depicting all sorts of unspeakable debauchery. Given these expectations, "Montenegro" is surprisingly tame. Sure, there is a sex act in a mound of grain, a suggested three-way between unlikely partners, a shocking use of poison, a friendly man with a knife embedded in his forehead and an unforgettable burlesque dance (the girl courts a toy military tank with an "erect" vibrator attached), but otherwise? Appalling table manners are about as bad as it gets. Toss in a contraband pig carcass and a grandfather who thinks he's Buffalo Bill, if you like. Regardless, I doubt the film had any trouble avoiding an "X" rating, even though the story sounds like a classic pornography template. Susan Anspach is Marilyn Jordan, wife of a wealthy but inattentive businessman (Ingmar Bergman stalwart Erland Josephson). Obviously frustrated with a pampered lifestyle where her biggest problem is a lynx coat's excessive shedding, she has been acting out in strange ways. When she spontaneously decides to accompany her husband on a short trip, there is an unexpected security issue and she misses the flight. Detained at the airport, she finds herself bonding with some Yugoslavian gypsies, who end up whisking her away to their odd, isolated compound. The troop's raucous celebrations are a refreshing novelty, and she releases her inhibitions. The results are alternately delightful and disturbing. Bless his warped heart, Makavejev remains cheerfully tasteless and clumsy as a director. The story takes far too long to heat up (about 45 minutes), and the musical score is typically goofy. There are extreme facial closeups, awkward insertions of animal footage (it's, like, metaphorical) and plenty of overacted scenes (particularly in the case of Per Oscarsson's effete psychiatrist). As for time-dated content, we also get two ABBA tunes and some awful '70s perms. Still, the film's ending is so good that you'll forgive most of the earlier mishaps.

Crazy, crazy, crazy lady, and based on a true story to boot.