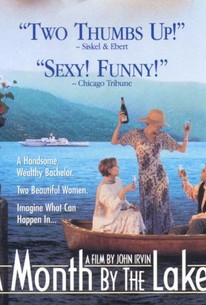 This romantic comedy is set upon Italy's beautiful Lake Como just before WW II erupted in Europe. British, middle-aged, but still-attractive Miss Bentley has come to the lake to visit the family resort. She has not been there since her father died and since her 14-year relationship with a married man broke up. The place has changed since she was there last and there is only one other Britisher there, the single, handsome Major Winslow, a wealthy industrialist. He and she engage in a few rounds of tennis, and begin a tentative romance that is interrupted when flirtatious American-upstart Miss Beaumont shows up and begins toying catlike, with the affections of the vulnerable major. Meanwhile, Miss Bentley finds herself dallying with a handsome young Italian.

Sonia Martinelli
as Maria
View All

Critic Reviews for A Month by the Lake

A Month by the Lake is a sly romantic comedy about a collision of sex, ego, will and pride, all peeping out from beneath great thick layers of British reticence.

Vanessa Redgrave has never been more likable on screen than in her buoyantly athletic turn here.

Thoroughly enjoyable love story set at an Italian resort by Lake Como in 1937.

Audience Reviews for A Month by the Lake

Beautiful scenery and a bewitching Vanessa Redgrave make this a lovely viewing experience, Uma is out of her depth here.

A Month by the Lake Quotes