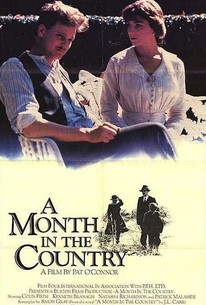 A Month in the Country Photos

Pat O'Connor directs this tranquil version of the J. L. Carr novel, adapted for the screen by Simon Gray. The film concerns two emotionally scarred men recovering from the horrors of World War I during an idyllic summer in the English countryside. It is 1919, and war veteran Tom Birkin (Colin Firth) travels to the small English village of Oxgodly to restore a medieval church mural that is hidden under coats of plaster. At the same time, another war veteran, archaeologist John Moon (Kenneth Branagh) is exploring the nearby fields trying to uncover an ancient church grave. As they toil away in this placid environment, their emotional war wounds are gradually healed, and they come to terms with their problems. Birkin finds himself falling in love with Alice Keach (Natasha Richardson), the wife of the local vicar, while Moon finds himself learning to deal with his homosexuality.

Patrick Malahide
as the Reverend J.G.

Critic Reviews for A Month in the Country

A pleasant an enjoyable film, A Month in the Country gives the formal achievements of British cinema a certain spirituality, sensuality, and feeling. [Full Review in Spanish]

Ultimately, A Month in the Country is too full of exquisitely quiet moments that never explode.

...what a precious, unexpected gem.

A Month in the Country is a movie of morsel-sized pleasures, yet there's a sizable joy to be had in catching Colin Firth and Kenneth Branagh at the start of their long and impressive careers.

Explores the suffering and losses of lonely souls.

Audience Reviews for A Month in the Country

There are no featured audience reviews yet. Click the link below to see what others say about A Month in the Country!

A Month in the Country Quotes