Monty Python and the Holy Grail1975 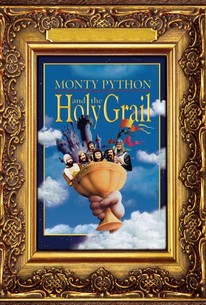 Critics Consensus: A cult classic as gut-bustingly hilarious as it is blithely ridiculous, Monty Python and the Holy Grail has lost none of its exceedingly silly charm.

Critics Consensus: A cult classic as gut-bustingly hilarious as it is blithely ridiculous, Monty Python and the Holy Grail has lost none of its exceedingly silly charm.

Critic Consensus: A cult classic as gut-bustingly hilarious as it is blithely ridiculous, Monty Python and the Holy Grail has lost none of its exceedingly silly charm.

From its opening multi-language titles (that sure looks like Swedish) to the closing arrest of the entire Dark Ages cast by modern-day bobbies, Monty Python and the Holy Grail helped to define "irreverence" and became an instant cult classic. This time the Pythonites savage the legend of King Arthur, juxtaposing some excellently selected exterior locations with an unending stream of anachronistic one-liners, non sequiturs, and slapstick set pieces. The Knights of the Round Table set off in search of the Holy Grail on foot, as their lackeys make clippety-clop sounds with coconut shells. A plague-ridden community, ringing with the cry of "bring out your dead," offers its hale and hearty citizens to the body piles. A wedding of convenience is attacked by Arthur's minions while the pasty-faced groom continually attempts to burst into song. The good guys are nearly thwarted by the dreaded, tree-shaped "Knights Who Say Ni!" A feisty enemy warrior, bloodily shorn of his arms and legs in the thick of battle, threatens to bite off his opponent's kneecap. A French military officer shouts such taunts as "I fart in your general direction" and "I wave my private parts at your aunties." Rabbits are a particular obsession of the writers this time around, ranging from the huge Trojan Rabbit to the "killer bunny" that decapitates one of the knights. Graham Chapman, John Cleese, Terry Gilliam, Eric Idle, Terry Jones, and Michael Palin collaborated on the script and assumed most of the onscreen roles, while Gilliam and Jones served as co-directors. ~ Hal Erickson, Rovi

Connie Booth
as The Witch

Michael Palin
as 1st Soldier with a Keen Interest in Birds

Carol Cleveland
as Zoot and Dingo

John Young
as The Dead Body that Claims It Isn't

Rita Davies
as The Historian Who Isn't A.J.P. Taylor

Sally Kinghorne
as Either Winston or Piglet

Avril Stewart
as Either Piglet or Winston

Sally Kinghorn
as Either Winston or Piglet

News & Interviews for Monty Python and the Holy Grail

View All Monty Python and the Holy Grail News

Critic Reviews for Monty Python and the Holy Grail

The first non-sketch Python film is one of the great Arthurian romps.

The material is superb, Neil Innes' music is tremendous and Gilliam's animations are timelessly brilliant.

So unnecessarily gorgeous, there are moments where it feels like Tarkovsky with drag and farting.

Here is Monty Python and the Holy Grail, which is neither as sparkling as it is said to be nor as bad as it seems to be at the start. But it's pretty good.

Grail is as funny as a movie can get, but it is also a tough-minded picture -- as outraged about the human propensity for violence as it is outrageous in its attack on that propensity.

There's something about feature films that brings out the best in the Pythons. The occasional indulgence of the TV series is replaced by a more focused approach which wrings every conceivable joke out of a given subject.

A gut-bustingly hilarious cult classic which remains just as funny and wonderfully ridiculous, the Monty Python crew's comic exploration of the Dark Ages has lost none of its silly charm.

Some sketches are amusing, others are funny, and a rare few are altogether side-splitting.

Worth a look if you've never seen it, but real fans know the best is yet to come.

There are classic bits here about plagues, witches and chivalry, but their best scenes poke fun at ye olden days while stating that after 900 years, nothing has changed.

The film goes on working a sense of humor that grows great in the continuous absurdity that always characterized the English work. [Full Review in Spanish]

Terribly exciting and clever, and while its sharpness has been considerably blunted through time, you can still tell where it once was.

Audience Reviews for Monty Python and the Holy Grail

Monty Python and the Holy Grail is a prevailing oddball comedy that continues to be viewed as a cult classic. Its dynamic cast and gag-filled narrative would delight any moviegoer and the film resonates as one of the more memorable comedies to this day because of it. 4/5

It's a shame I can't give a film 7 stars out of 5, because this film is almost worthy of that. One of my favorite reviewers online (Movie Bob for The Escapist) once pointed out that its extremely difficult to review a good comedy because it's impossible to accurately review it without giving away the good parts. And I'm now faced with this problem times a million. This is one of the funniest (if not the funniest) films of all time. Just take my word for it, this is a great film.