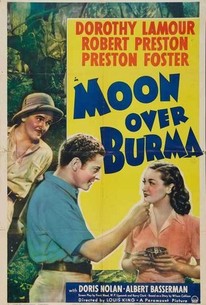 Dorothy Lamour once again wraps a variety of alluring costumes around her hourglass frame in the Paramount bread-and-butter feature Moon Over Burma. Lamour is cast as Aria Dean, an American showgirl stranded in Rangoon. It doesn't take long before Aria becomes the romantic bone of contention between teak-lumber camp owners Chuck Lane (Robert Preston) and Bill Gordon (Preston Foster). The animosity between the two men is put on the back burner when the film's villains attempt to block shipment of Lane and Gordon's logs, a dilemma exacerbated by a deadly forest fire. Albert Basserman's performance as the blind logging-camp supervisor is an interesting precursor to his similar performance in the superior Paramount "B" Fly By Night. ~ Hal Erickson, Rovi

Ram Singh
as Native
View All

Critic Reviews for Moon over Burma

The movie is nice and Dorothy Lamour's songs contribute to the good result. [Full review in Spanish]

There are no featured reviews for Moon over Burma at this time.