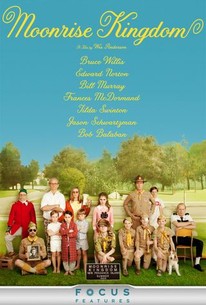 Set on an island off the coast of New England in the summer of 1965, Moonrise Kingdom tells the story of two twelve-year-olds who fall in love, make a secret pact, and run away together into the wilderness. As various authorities try to hunt them down, a violent storm is brewing off-shore -- and the peaceful island community is turned upside down in more ways than anyone can handle. Bruce Willis plays the local sheriff. Edward Norton is a Khaki Scout troop leader. Bill Murray and Frances McDormand portray the young girl's parents. The cast also includes Tilda Swinton, Jason Schwartzman, and Jared Gilman and Kara Hayward as the boy and girl. -- (C) Focus Features

Bob Balaban
as The Narrator

Moonrise Kingdom makes a winning appeal to the precious joys of the pre-teen imagination circa 1965.

The film is frequently funny, always elegant (or mock-elegant), and something that would make Humbert Humbert laugh all the way to his asylum.

It's not my favourite Wes Anderson film but I do like it very much.

There are many echoes of Anderson's earlier films, particularly Rushmore and Tenenbaums. He's an unapologetic romantic and Moonrise Kingdom is a study in wish-fulfillment.

Wes Anderson's love letter to young love is a pure cinematic delight from go to whoa.

Moonrise Kingdom spends a lot of time looking at how sad, confused adults can both abandon and come to the rescue of sad, confused teens.

A realistic story set in what could, perhaps, be called an unrealistic world.

Engrossing, genuinely touching, and even a touch adventurous.

It is further proof that Wes Anderson's mind is constantly challenged at the time of generating ingenious ideas. [Full review in Spanish]

Moonrise Kingdom is the closest that Wes Anderson has ever gotten to Trufaut. [Full Review in Spanish]

Charming and whimsical, herein is a call to separate from the lousy group that treats you badly, and to lovingly embrace yourself. If someone else wants to embrace you: that's even better. Wes Anderson on steroids.

I guess that Wes Anderson was probably bored with his toys when he decided to make this movie, out of a lack of anything better to do, for he clearly has nothing to say here and throws everything he can think of (including a great cast) in this pointless, unfunny mess that leads nowhere.

After a second viewing: I think I was too ready to love this movie. Great cast, great style, and sweet story of young love, but there's also a "same old Wes Anderson" feeling to it; it's almost belaboured. Despite Bill Murray and Frances McDormand, you rarely laugh out loud, and it's almost played too straight: trying to be too sweet. Anderson makes unique films, and I do like them all, but he may be getting stale. He hasn't blown me away since The Royal Tenenbaums. I have great expectations for The Grand Budapest Hotel, and in a way, I think he needs to knock that one out of the park in order to keep making the kinds of movies he wants to make. I'm starting to see a Tim Burton career parallel, in which he ends up only getting work from Disney. It wouldn't be the worst think in the world, but it would lead to compromises in his films' most valuable aspect: their aesthetic.

Probably my favorite film of the year (and what a good movie year it was!). Director Wes Anderson crafts a film that has a heart as big as its brain, creating a sweet story of adolescent love. It's Anderson's most delightfully quirky, toning down his usual sardonic but keeping the essence of an "Anderson" film. His shots seem compulsively symmetrical, the production design a matter of balance that feels quaint instead of off-putting. I want more tales of Suzy and Sam, but know I shouldn't get any- and that's the mark of a timeless film.