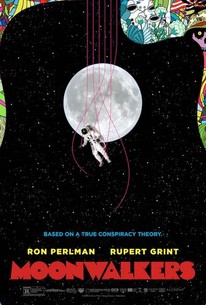 After failing to locate the legendary Stanley Kubrick, an unstable CIA agent (Ron Perlman) must instead team up with a seedy rock band manager (Rupert Grint) to develop the biggest con of all time-staging the moon landing.

On DVD This Week: Spotlight, Fargo, The Good Dinosaur, and More
Ride Along 2 Isn’t Worth the Trip

Along with a lot of laughs, Moonwalkers offers a lovingly critical take on pop culture, touching on themes of patriotism and film industry pomp, without getting cynical.

It's all good English fun, full of drugs, brutality, and general late-'60s decadence. It's also weirdly slack for such an insane ride, as if director Antoine Bardou-Jacquet was afraid he might get in the way of Dean Craig's splendid story.

Forget a fake moon landing. "Moonwalkers" is a fake comedy ...

Director Antoine Bardou-Jacquet, who devised the story, is dazzled by period style and puerile jokes, but nothing lands as especially funny, merely tired.

The misguided "Moonwalkers" invests too much in the comedy potential of things that haven't been funny for a long while.

Houston, we have landed in an overtly silly, mod-and-LSD rendition of '69 London that seems on loan from the Austin Powers sets.

While the premise of Moonwalkers was rather original, the execution is fairly generic.

The film itself is silly and on occasion fun, but it doesn't quite gain any momentum... Moonwalkers could have been a lot better if it hadn't lacked so much focus.

If viewers disarm themselves of expectations but keep in mind references to decades past, then Moonwalkers will provide entertainment and few LOL moments.

Playing a psychedelic Swinging Sixties riff on the notion that Stanley Kubrick faked the Apollo moon landings for NASA, Moonwalkers concocts a goofy slapstick scenario out of the famous conspiracy theory.

Bardou-Jacquet cut his teeth on adverts and music videos, and it shows; he gets an A for visuals and "groovy" set design, but a D for plotting, dialogue and the ability to milk a scene for a joke.

I honestly wanted to really like this movie, it's energetic and it, at the very least, unlike a lot of films, seems to really try to be telling fairly unique and different from everything else that's out there. And I have to say that it does succeed at what it sets out to do, it does at the expense of the film's consistency and pacing. When you have a film that's as ambitious as this, that's par for the course, and part of me likes to see the fact that, even if it might not hit on all cylinders, that this film exists because, as a blurb on here states, this has 'cult favorite' written all over it. The flaws are readily apparent. Perhaps the biggest one is the fact that I think this concept is better suited for a short film instead of a full-length one. Not saying that the film stretches things out past their breaking point, but there's long instances of the film where there's not a laugh to be had. The film does have its funny moments, but they're spread far and wide, if the movie was a little shorter then that might not have been a problem. I did, however, like the fact that the movie very much felt, from the look to the costume design, to some of the psychedelic moments, like it came from the 60s. It's clearly not shot with 60s camera, which would've been the only thing that might've made the movie cooler. The cast is more than good. Rupert Grint, a guy that I literally grew up watching, he's only 6 months younger than me, has grown into a pretty good actor. Really, all of the leads from Harry Potter have grown up to be real good actors. They might not be respected as actors yet, but they've grown and matured to be reliable leads on their own without any gimmicks. Well, I mean, this movie is kind of gimmicky, but you know what I mean. The film plays with the supposed moon hoax theory, which I think is bullshit, in a fun fashion. It might not go as far as it possibly could with the concept, but it does make up for it with its lively approach. This is a pretty shitty review, all things considered, but this movie is an enjoyably average movie. It's unlike anything you've ever seen and that's not necessarily reason enough to watch it, because the execution in parts isn't great, but I'd recommend it if you want something that's different and offers some enjoyable stuff. It might not be consistently enjoyable, but there's some fun to be had here. It's on Netflix, so you know how it is.

Lots of fun as a traumatized CIA agent heads to swinging London in the 1960's to try to get a film made on the sly. Unfortunately, he gets there, swinging London, and its totally uninterested in what the CIA may be on about. What's great about the film? Every moment Perlman's onscreen. What's not? When he's not onscreen, the swinging London party's a tad under developed. Still some fun.