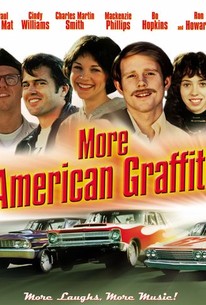 Returning from the original American Graffiti are Debbie Dunham, Steve Bolander, John Milner, Carol/Rainbow, Terry the Toad and Laurie Bolander (Candy Clark, Ron Howard, Paul LeMat, Mackenzie Phillips, Charles Martin Smith and Cindy Williams), but Richard Dreyfuss is missing and Harrison Ford shows up in a gag cameo. The sequel brings its principles into the more radical end of the 1960s, with Steve and Laurie, now married, on the fringes of the protest movement. Debbie and Carol have been lured into the flower-power milieu by rocker Newt (Scott Glenn). And John has parlayed his love of hot rods into a drag-racing career. ~ Hal Erickson, Rovi

Will Seltzer
as Andy Henderson

Wolfman Jack
as Himself

Barry Melton
as Country Joe and the Fish band member #2

Robert Hogins
as Country Joe and the Fish band member #3

Robert Flurie
as Country Joe and the Fish band member #4

Peter Albin
as Country Joe and the Fish band member #5

Harold Aceves
as Country Joe and the Fish band member #6

Rosanna Arquette
as Girl in Commune #1

Becky Bedoy
as Girl in Bus #1

Buzz Borelli
as The Freak

Rockey Flintermann
as The Neighbor

Naomi Judd
as Girl in Bus #2

Sandra Rider
as Girl in Commune #2

While dazzling to the eye, the flirtation with split-screen, anamorphic, 16mm and 1:85 screen sizes does not justify itself in terms of the film's content.

Hate to make the obvious snark, but sometimes "More" is less.

Another sequel that never should have been committed to celluloid.

I'm not quite sure if George Lucas was involved with the sequel. We know he doesn't have a reputation for making unnecessary sequels (ha ha). Anyways, this one should have been shelved in a hurry. We end up hating the characters that we loved in the first film.