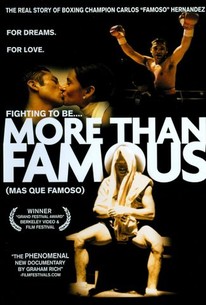 More Than Famous takes an intimate look at the life of super featherweight boxer Carlos "Famous" Hernandez. Director Graham Rich's digital video documentary picks up the story as Hernandez is preparing to fight WBC champion Floyd Mayweather for the title. The film explores Hernandez's return to boxing prominence at the age of 30, with the help of manager Robert Mittleman and legendary trainer Amilcar Brusa. Hernandez's beautiful wife, Veronica, a psychologist, is nearly always at his side, and their playful and loving relationship is the focus of the film. Hernandez is shown training for the fight, and struggling to reach his fighting weight. Veronica discusses her frustration at not being able to have sex with her husband while he trains. Fighting on Mayweather's home turf in Grand Rapids, Hernandez enters the ring as a huge underdog. Extensive clips from the fight, broadcast on HBO in May of 2001, are shown. In the aftermath of the surprising title fight, Hernandez travels to his homeland, El Salvador, to fight again. A devastating earthquake has hit the country, destroying many homes, and Hernandez donates time and money to help the victims. He's determined to raise the spirits of his countrymen. The terrorist attacks of September 11, 2001, take place days before the fight is scheduled, and the promoters consider canceling the bout. More Than Famous was shown at the 2002 Urbanworld Film Festival.

Critic Reviews for More Than Famous

There are no critic reviews yet for More Than Famous. Keep checking Rotten Tomatoes for updates!

There are no featured reviews for More Than Famous at this time.