More Than The Rainbow2014 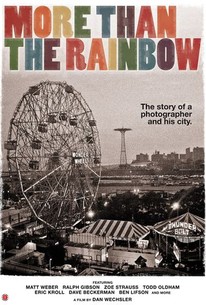 More Than The Rainbow Photos

In our time, an equally compelling presence roams the streets of New York armed with only a camera: Matt Weber. There is no telling how many stories Weber has attempted to capture since he first started taking pictures out of the window of the cab he used to drive. But his quarter century-plus devotion to candidly depicting the lives of his fellow New Yorkers, many of them from the fringes of society, has yielded a remarkable document of a New York that most of us will never experience. Part character study and part meditation on photography, MORE THAN THE RAINBOW interweaves live action, still photography and revealing interviews with Weber and fellow photographers. Shot on both hi-def video and in 35mm, and largely scored to the music of Thelonious Monk, this beautiful and evocative documentary is a poetic celebration of the world's greatest city and the individuals who walk its streets. (c) First run Features

Critic Reviews for More Than The Rainbow

Mr. Wechsler's film might be loose to a fault, but Mr. Weber's work yields its share of gratifying, blink-and-you'll-miss-it New York moments.

Weber's expertise, tenderness, and taste for the absurd become clear.

The film's segments move seamlessly from one topic to the next with the unselfconscious ease of a good dinner party.

Lacks focus, and doesn't even recognize its own best material.

Well-balanced, witty and illuminating. A must-see for anyone who's even remotely interested in photography

There are no featured reviews for More Than The Rainbow at this time.

More Than The Rainbow Quotes