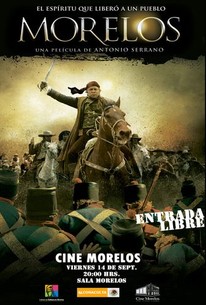 This biopic focuses on the final four years of Jose Maria Morelos y Pavon, a heroic figure in Mexican history who helped lead numerous battles that allowed the country to gain independence. The movie captures both his prickly personal side, as well as his grand ambitions - including invading Acapulco - that made his troops so loyal. ~ Perry Seibert, Rovi

There are no critic reviews yet for Morelos. Keep checking Rotten Tomatoes for updates!

There are no featured reviews for Morelos at this time.