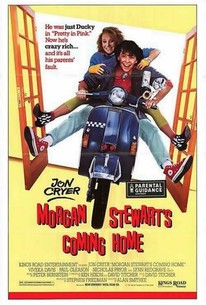 An ambitious father thinks nothing of using his own son to achieve his political goals in this adolescent comedy. The lonely boy has spent the last seven years tucked away and ignored by his parents, Senator Tom Morgan and his social-climbing wife Nancy, in a distant boarding school. As the story begins, he receives the depressing news that once again they will be too busy to have him home for the holidays. But then, out of the blue, they change their minds and invite him home to stay there for good. The boy is elated, but soon after his arrival, he learns the bitter truth: his father only brought him back because it is an election year and his campaign manager thought he might do better if the public saw him as more of a family man. The boy then decides that it is high time some changes were made around the house and mayhem ensues.

even with the Alan Smithee label, Morgan Stewart's Coming Home isn't bad at all

All these years, I've kept a soft spot in my heart for it, in all its clumsy glory. Could I ever quite call it a good movie? Not really, not entirely.

I love Jon Cryer in this movie. It's also got a good story, it's not fantastic, but it's a lot of fun and very funny, I really like this movie, and I highly recommend it.

Viveka Davis is hot, and Jon Cryer is likeable in this 80's slapstick comedy. It all goes a bit downhill for the finale, but it has its moments.