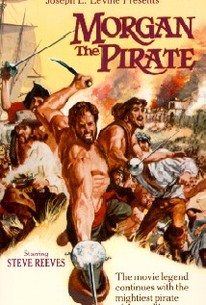 Steve Reeves trades sandals and togas for the frilly, functional outfits common to 17th-century buccaneers in Morgan the Pirate. As the real-life Sir Henry Morgan, Reeves is sold into slavery and forced to work on a Panama plantation. He is purchased by haughty Valerie Lagrange; they fall in love, and as punishment Reeves is condemned to toil in the galley of a Spanish vessel. He leads an escape, overtakes the ship, and establishes himself as a pirate captain. In true Captain Blood fashion, he eventually catches up with his former amour LaGrange, laying waste to most of Panama in the process.

Ivo Garrani
as The Governor

Dino Malacrida
as The Duke

Mimmo Poli
as Pirate
View All

Critic Reviews for Morgan the Pirate

Audience Reviews for Morgan the Pirate

European based semi swashbuckler is fit only for a rainy afternoon when nothing better is on.