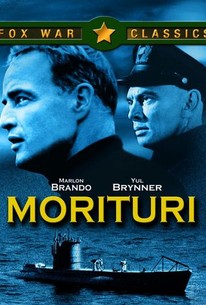 In this hard-hitting World War II espionage drama, Captain Mueller (Yul Brenner) must deliver a valuable shipment of 7,000 tons of crude rubber from Japan to Germany. On board is Robert Crain (Marlon Brando), a wealthy German deserter who now claims to be a Swiss national. Crain tries to sabotage the mission, which is being carried out by German political prisoners. Esther (Janet Margolin) is a Jewish woman put off the ship by the Japanese. Trevor Howard plays British officer Colonel Slater, with Wally Cox as the ship's physician Dr. Ambach. Crain poses as a Nazi SS officer who is secretly working for British intelligence. Mueller rightfully suspects Crain and denies him access to key areas of the vessel, and tension builds as Crain tries to carry out his mission, knowing that failure will mean certain death.

Marlin Beneath
as Kruse

Tommy Webb
as Members of US Merchant Marine

Alas, the melodrama is as turgid as that title they have given the film, and anxiety over the fate of Mr. Brando is dissipated in a vastly cluttered plot.

It is competent, skilled, professional, and slick, and because it is all these things, it is marvelously entertaining.

A little gem to discover. [Full Review in Spanish]

Brando gives a powerful performance as a German deserter in this fact-based WWII drama, which was underestimated at the time.

The action of the story, the introducing of one crisis after another all help to build suspense, but the length of the film does make it bog down now and then.

With that cast this should have been more involving but after a decent start if drags to its conclusion.

In "Morituri," Captain Mueller(Yul Brynner) is incensed at having been demoted to being skipper of a boat taking 7000 tons of rubber to German occupied France, not to mention the political prisoners that will also be working in the engine room. To keep him placated, his superiors threaten him with wrecking his son's career if he does not cooperate. He would be even less happier if he knew that his new political officer is actually Robert Crain(Marlon Brando), a German engineer who deserted on the eve of war to India where he is being gleefully blackmailed by Colonel Statter(Trevor Howard). He not only wants the rubber to not reach its intended destination, but also wants the Allies to have it, ordering Crain to scuttle the scuttling devices, of which he has no idea where on board they might be. There is a great movie in "Morituri" just waiting to get out but it just does not entirely pull it off and put all of the pieces together. However, it is fun watching Brando and Brynner play a high stakes game of cat and mouse between two characters who are in the same boat, so to speak. So, on the one hand, there is a lot of old fashioned intrigue, but in the last half hour, reality creeps steadily in, almost from another movie entirely. I know this is meant to give the pacifist Crain a sense of purpose, but he seems to be doing pretty well up until then. The movie made in 1965, might have included this more as information intended towards the audience which might have been more ignorant of the Holocaust than we are now.

An underrated gem in Brando's career that presents an astute approach to character dynamics and suspense. Directed and photographed with expertise, this is a top-notch espionage thriller that engages from its first scene until the grim conclusion. Marlon Brando's understated performance is also immensely underappreciated, and Yul Brynner does a great job too.