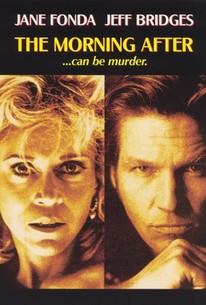 The Morning After Photos

In this excellent thriller, crisply directed by Sidney Lumet, Alex Sternbergen (Jane Fonda), a washed-up, alcoholic actress who never quite made it, wakes up one morning in an unfamiliar, luxurious loft apartment, only to find the corpse of a stranger next to her in bed. Alex can remember nothing of the night before. In a panic, she tries to flee but is unable to get a flight out of Los Angeles, and short of cash, she hitches a ride with Turner Kendall (Jeff Bridges), a disabled former policeman who happens to be fixing his car in the airport parking lot. Alex tries to get rid of Turner and returns to the loft which she cleans in a futile attempt to get rid of her finger prints. Turner continues to take an unappreciated interest in Alex and keeps turning up unexpectedly, much to her annoyance. Finally, desperate and on the run, and never sure that she didn't commit the murder, Alex allows Turner to help her. Alex also confides in and is helped by her ex-husband and friend Joaquin Manero (Raul Julia), the only man she completely trusts. Despite Alex's suspicion of Turner, she slowly falls in love with him. The movie quickly moves to a surprising conclusion, and creates a good deal of suspense, particularly when Alex is confronted with a corpse that just won't stay put. The highlight of the film is the performance by Jane Fonda reminiscent of her magnificent performance as Bree Daniels in Klute. The Morning After never rises to the quality of Klute, but Fonda's performance was strong enough to earn her an Oscar nomination. ~ Linda Rasmussen, Rovi

James Haake and Scamp
as Frankie

Critic Reviews for The Morning After

The Morning After is, for a romantic thriller, perhaps over-burdened with possible patterns.

Sidney Lumet directs wearily; as a thriller, it's full of holes.

It would be a mistake, however, to dismiss this movie just because the plot is so shaky. I think it's worth considering because of the performances. Fonda and Bridges are wonderful in the film.

The thriller is always looking for something that is missing and never finds it.

As an alcoholic ex-actress, Jane Fonda gives a brilliant, Oscar-nominated peformance in Lumet's routine thriller set (for a change) in L.A.

alternately insults you and makes no sense at all

The film is lifted by an emotionally affecting performance by Jane Fonda.

Audience Reviews for The Morning After

Even a great filmmaker is not infalible, not when he has to work with a poor screenplay. The tone rambles, never decides if it is a comedy, a soap opera or a thriller. Performances by Jane Fonda, Jeff Bridges and the underused Raul Julia do some good to this ridiculous and predictible mess.

A good thriller from Lumet, a great director, and it has a great cast too. I really liked this movie.

Jane Fonda gives an incredibly nuanced performance as a spiraling down drunkard, she researched the tragic 40's star Gail Russell who drank herself to death at 36 to fully understand her characters plight of a once promising actress reduced to blackouts and infamy. Jeff Bridges is almost as strong as a stranger trying to help her out of a situation she can't even remember. The rest of the cast gives good support starting with Raul Julia on down to a pre-stardom Kathy Bates in a tiny role, the problem is that the script that all this superior work is working with is ill conceived and not terribly well directed by the usually excellent Lumet.

If you like murder mysteries with powerhouse acting and directing, this is the movie to see. While the story is interesting and unique, it's the characters that make you stick around. Sidney Lumet makes this such an above average movie in that it doesn't feel like a typical thriller or drama or romance, it's sort've a nice blend between all three. There's no gimmicks or cheap scare tactics, which is really nice. Jane Fonda is just so convincing as a raging drunkard, but of course she has such a lovable side to her. Jeff Bridges does what he does best, being charming and smiling a lot. While this isn't a game changer or anything, it's just a really solid and worthwhile movie.

The Morning After Quotes