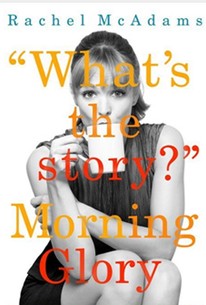 Critics Consensus: It's lifted by affable performances from its impeccable cast, and it's often charming -- but Morning Glory is also inconsistent and derivative.

Critics Consensus: It's lifted by affable performances from its impeccable cast, and it's often charming -- but Morning Glory is also inconsistent and derivative.

Critic Consensus: It's lifted by affable performances from its impeccable cast, and it's often charming -- but Morning Glory is also inconsistent and derivative.

A new romantic comedy set in the hilarious and dysfunctional world of morning television. When hard-working TV producer Becky Fuller (McAdams) is fired from a local news program, her career begins to look as bleak as her hapless love life. Stumbling into a job at "Daybreak" (the last-place national morning news show), Becky decides to revitalize the show by bringing on legendary TV anchor Mike Pomeroy (Ford). Unfortunately, Pomeroy refuses to cover morning show staples like celebrity gossip, weather, fashion and crafts, let alone work with his new co-host, Colleen Peck (Keaton), a former beauty queen and longtime morning show personality, who is more than happy covering morning "news." As Mike and Colleen clash, first behind the scenes and then on the air, Becky's blossoming love affair with fellow producer, Adam Bennett (Wilson) begins to unravel. And soon Becky is struggling to save her relationship, her reputation, her job and ultimately, the show itself.

Miguel A. Hernandez Jr.
as Editor

Alice Callahan
as Girl at Schiller's

Elaine Kaufman
as Herself

Bob Schieffer
as Himself

Morley Safer
as Himself

Tony Yayo
as Himself

DJ Whoo Kid
as Himself

DJ Whoo Kidd
as Himself

Lloyd Banks
as Himself
View All

Morning Glory is a lackluster knockoff to Devil Wears Prada, minus the heart, cleverness and fashion. It's just not a good time, as it claims to be.

[A] deeply dislikable comedy of embarrassment...

Morning Glory stays firmly on the launchpad, doing increasingly desperate run-ups, but collapsing in a gawky heap whenever it tries to take off.

Rachel McAdams, a once fetching actress, runs about as if "Fetch!" is the only cry coming from behind the camera. Fetch the joke; fetch the funny line-reading. Wave your arms about.

A vehicle for an effortless performer, but void of conviction.

Morning Glory is a film that spends its running time staring into the abyss and giggling. Its audience might not be able to resist pushing it in.

Complacency is the guiding principle of Morning Glory.

What it does it does well.

This talented cast is stuck in a low-rent script that is just as dimwitted as the daytime talk show at the center of the film.

The producers and writers missed a chance either to make the case for television news or to bid it a fond farewell. To ignore such an obvious elephant in the room seemed odd.

I saw Broadcast News twenty-three years ago and I remember every word. I saw Morning Glory last week, but I don't think it'll have the same impact. Fun, but ultimately forgettable.

Rachel McAdams shines as the frazzled, determined and adorable up-and-coming TV producer, but the movie just doesn't pay her back. Between its plot (The Devil Wears Prada-esque), its feuding anchor dynamic (a watered-down Anchorman) and its cringe-worthy love scenes, all that's left is the cloying happy ending. There is a very good movie hidden in here somewhere, but it's just too formulaic and it grates by the end.

In the end, it's a rom com. You want it to be about an empowered young woman working her way up the ladder to professional success. You will be disappointed.

I liked it, didn't love it. One of the better not-totally-generic-but-still-totally predictable rom-com in recent years.