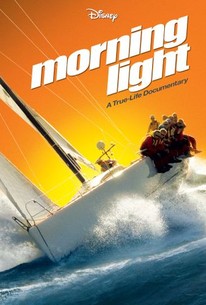 Critics Consensus: Breathtaking scenery aside, Morning Light is geared more for the sailing enthusiasts than for the average viewers.

Critics Consensus: Breathtaking scenery aside, Morning Light is geared more for the sailing enthusiasts than for the average viewers.

Critic Consensus: Breathtaking scenery aside, Morning Light is geared more for the sailing enthusiasts than for the average viewers.

A group of 15 young sailors prepares to compete in the most revered open-ocean sailing competition in the country, and the director and editor of the 2006 surfing documentary Riding Giants keep their focus on the water in order to capture the adventure of a lifetime. Racing in the Transpac is no easy feat; after enduring six months of grueling training, the daring young crew of the Morning Light will engage in a 2,300-mile endurance against the most experienced sailors in the country. In the process of becoming a world-class team, however, this group will form a bond incapable of being broken by even the most massive of ocean waves.

Morning Light is a sunny, saltwater-splashed tale of inspiration.

The documentary is enjoyable, though it could have been edited more tightly.

For those who love sailing, Morning Light will confirm their passion and please them right down to their Top-Sider encased toes. For the rest of us, this sailors' tale just smacks of naval gazing.

If you don't speak the jargon of sailing and racing, most of the conversations between teammates mean very little. Impenetrable editing reduces the action to a meaningless blur.

The aristo-brats are required to jump into a swimming pool and tread water for five minutes with their shoes on. Horrible! Still, one of them nearly drowns, proving that he shouldn't be allowed near a body of water larger than a bottle of Poland Spring.

These eager young amateurs have the kind of passion nobody could fake.

(T)his may be one of those achievements in human endurance that doesn't elicit cheers, but sneers. It's just too picture perfected to be powerful.

A vanity project...[but also] a sincere love letter to sailing, as seen through the eyes of a handful of very lucky youngsters. [Blu-ray]

Any time...personal history is touched upon, it is quickly shoved under the carpet in favor of yet another sailing montage, complete with compulsory sunset.

This flat, uninspired sailing documentary from the Walt Disney studios has surprisingly little to say.

All good intentions aside, Morning Light is nothing more than a glorified television documentary.

It's a fine little documentary but it comes off more like a commercial for the race more than anything else. It tells us about the people chosen for the TransPac sailing race and their six month training. But it all goes really fast and then we are in the race and then it's over. There are eleven people on the team but we really don't take time to get to know them. Plus there are voice overs read by the kids on the boat that don't have any emotion to them. That got old real fast.