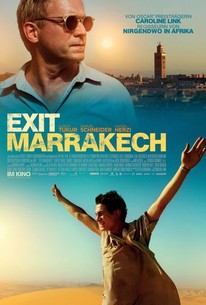 SYNOPSIS (from TIFF) On vacation in the Moroccan capital to visit his estranged theatre-director father, 17-year-old Ben finds himself fascinated by the bustling, colorful city - and by a beautiful young woman who hails from a far different world than his own. Caroline Link won the Academy Award for Best Foreign Language film with Nowhere in Africa, a tale of German migrants far away from home in Kenya. In Exit Marrakech she once again transplants her characters to a hotter, more unpredictable locale, this time telling a contemporary story of young wanderlust. Heinrich (Ulrich Tukur) is an acclaimed German stage director invited to Morocco to participate in an international theatre festival. The arrival of his seventeen-year-old son Ben (Samuel Schneider) presents an opportunity for family bonding in a fresh environment, but old grievances quickly resurface. Ben soon leaves behind his father's luxury hotel to explore Morocco on his own. In the way of so many young men of privilege, he is inevitably drawn to a girl from a poorer, less coddled background (the terrific Hafsia Herzi from The Secret of the Grain). Ben follows Karima back to her Berber village, falling completely out of touch with his father and with the security he has always known. Link's sensitivity to the emotional triggers that exist between parents and children helps to anchor the story in the familiar, while her keen eye for Morocco's natural beauty bathes our senses in wonderment, whether through breathtaking vistas of mountains and deserts or stylish shots of journeys by skateboard through the densely populated city. Like a fresher, contemporary Paul Bowles story, Exit Marrakech offers a glimpse of what can happen when a Westerner is confronted with the radically unfamiliar. (C) Adopt Films

Abdesslam Bouhssini
as Ahmed
View All

Exit is really a small-scale drama somewhat arbitrarily set against an expansive background, but one that ultimately satisfies on its own more modest, gracefully crafted terms.

Though the film tries to weld two genres together that are occasionally at odds with each other, there are quite a few powerful individual moments, the film looks and sounds gorgeous without overly fetishizing its exotic setting and the acting is strong.

Where Exit Marrakech gets a pass is via its technical merits, the film proving a solid character-driven entertainment - engaging, beautiful, and well-crafted.

Link's lopsided structure makes the aftermath with Ben's old man a bit of a drag. Still, there's plenty to see on this journey to adulthood