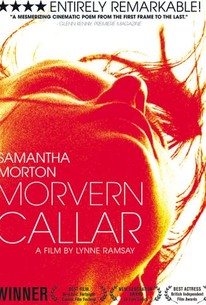 A thriller set in a remote Scotland port town, centering around Morvern Callar, an impoverished supermarket clerk. When her writer boyfriend commits suicide, Morvern, covers it up. Immediately following his death, Morvern--who's always struggled to make ends meet--steals his unpublished novel, sells it under her own name, and uses the profit to take off for the Mediterranean where she lives the easy, hedonistic life of a raver--clubbing non-stop in Ibiza, Spain.

Paul Popplewell
as Cat in the Hat

Marvel’s The Defenders, Reefer Madness, and More on Netflix and Amazon Prime

Ultimately provides little resolution for our tough heroine, and the way the film visualizes this discontent continues to haunt at least one viewer.

While [Lynne] Ramsay's sensibility is entirely her own, it approaches the rawness of work by Nan Goldin or Richard Billingham.

Morton finds a wealth of nuance in anomie and neurasthenia.

A mesmerizing conundrum of a suspended life in perpetual motion.

With little dialogue to assist her -- just the strains of that wonderfully organic music -- [Morton] still manages to suggest the internal struggle, and to slowly reveal a fierce toughness that flies in the face of conventional morality.

Ramsay and Morton trust the audience enough to resist softening up or even explaining their central character, resulting in a difficult yet ultimately rewarding piece.

The narration submits to the sensitised state that Morvern retreats into as she embarks on what could loosely be described as a personal epiphany: reinventing herself abroad.

"Morvern Callar" is beautiful, crushing, and nihilistic as hell. Samantha Morton + Lynne Ramsay = heaven and I want them to work on another project together.

Samantha Morton's performance recalls Emily Watson's work in Breaking the Waves -- you can't take your eyes off of her.

Morvern Callar is assured and confidently-made, even as the emotions of the title character seem brittle and crystalline.

"Morvern Callar," the second feature film from British writer/director Lynne Ramsay (after 1999's heart-breaking and unfairly overlooked "Ratcatcher"), is an enigmatic film with almost no dialogue. It tells the story of a twenty-something supermarket clerk (played by the always intriguing Samantha Morton) who skates along the surfaces of life, going from party to party. Ramsay's artistic goals are hard to pinpoint, but one of them here seems to be a fairly scathing indictment of 1990s British youth culture. Morton's character, named Morvern Callar, is a girl from a lower-middle-class background living in a small town in Scotland. She has a pleasant demeanor but little to say. She only hangs around with people her age, whose favorite pastime is all-night raves where drugs and alcohol flow liberally. Let's just say that reading books is the last thing on the minds of these 21-year-olds. Their greatest happiness is a feeling of oblivion. Ramsay may not like ravers very much, but she certainly gets them. The depiction of aimless youth is better here than I've probably seen anywhere. The problem is that it doesn't make for very compelling viewing. Boring people don't often make arresting protagonists. Ramsay also doesn't push her agenda with much intensity. She starts to seem as bored with the film as the characters are bored with life. I like the basic idea of the project very much, and there is a haunting quality to the filmmaking, just like there was with Ramsay's previous film, "Ratcatcher." But Ramsay got stalled in the story development, never fully baking her ideas. Thus "Callar" has a sketchy, fragmentary quality to it that isn't very compelling. There is one story thread that tightens up substantially at the tail end of the film involving a spectacular attempt at plagiarism and a dead boyfriend. The film would have been stronger had Ramsay focused on this more. She seemed determined to drain the movie of as much story as possible, when there were several threads begging for development. There's no mistaking, however, that Lynne Ramsay is a talented, original, and genuinely artistic filmmaker. Even a weaker piece of work from her has more value in it than the mountain of prefabricated entertainment product being churned out in America. Cinephiles the world over owe it to themselves to cross paths with Ramsay's work. I'm very disappointed that she's had trouble getting a third film together. I wait with bated breath for her return to filmmaking!

strange film but i liked it. samantha morton is always worth watching. more modern than ratcatcher but almost as stunning to look at. very nice soundtrack too.

Interesting movie...not entirely successful, but compelling in its own bizarre way. Lynne Ramsay has a hell of a good eye behind the camera and her music selections are superb. For someone with such a solid sense of style, and an unintrusive way of splicing it into a narrative, Ramsay hasn't exactly seen much work. Life sucks for female directors. My big problem with Morvern Callar is kind of my own - I have a huge problem comprehending Scottish accents and could hardly understand what any of the actors were saying. I watched the movie on Netflix, so subtitles weren't an option, and turning it up didn't help much. It's a testament to the movie's striking physicality that I took as much away from it as I did, so maybe it's actually an advantage in the long run. Also, some people may find the film ponderous and navel-gazing; it is inaccessible, yes, but never lost in itself. You could write an essay on what the movie tells you (and doesn't tell you) about Morvern. In this regard, the movie owes a lot to Samantha Morton, who seamlessly nails an incredibly tricky role. For me, her bizarre behavior didn't raise any question marks, but just acted as a reminder about how confusing it is to be young, poor and unhappy. Morvern Callar demands a lot of patience and attention, and the returns are not really for everyone. I recommend it, but hesitantly. If you don't care to watch the film, at least get the soundtrack. Boards of Canada, Aphex Twin, The Velvet Underground...good stuff right thurr.