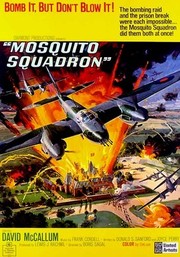 Allan C
November 26, 2014
Unspectacular, but passable WWII fodder. The story is about RAF officer David McCallum on a dangerous mission to take out a chateau. If you want to see a bunch of Nazis get shot up real good, you could do worse.

Super Reviewer
Randy T
½ March 18, 2012
Mosquito Squadron is rife with terrific aerial combat and bombing sequences but the film gets bogged down in it's romantic subplot and story tangents. Will Quint make a play for Beth, his best friend's widow. Will Beth learn that her husband is still alive? Will Beth's brother be fitted with a prosthesis for his missing hand? It's all far too distracting.

Senor C
January 11, 2012
A rather dull WWII Air Force actioner but it is never bad. Just makes the crucial mistake of being rather pedestrian & never really getting the audience involved. About as exciting as having egg on toast for dinner. Because of that it makes for extremely lazy viewing that you don't really care about what is going on & in turn you are happy when it is over so you can have your life back. Even w/ the final air attack strikes & the POW escape is going down you feel uninvolved because you have no connection w/ anybody. That may be because I didn't know anybody in the cast except for Charles Gray & after everything was all said & done I wouldn't recognize anyone in another film that I saw them in. Completely forgettable

horse c
November 29, 2011
Good Story and Cinematography, But the Acting Was a Bit 2nd Hand

Muffin M
June 11, 2011
As allied forces struggle against the awesome might of the German Luftwaffe, an even greater threat is posed by the destructive V3 rocket nearing completion at a secret testing center. The Royal Air Force's Mosquito Squadron gears up to destroy the site, but its leader, Quint Monroe, becomes conflicted when he discovers that the air strike may kill hundreds of British POWs - including the squad's former commander.

Tracey c
August 19, 2010
It is about a fictional Second World War 'bouncing bomb' raid by Royal Air Force de Havilland Mosquito fighter-bomber aircraft on a chateau in France. The target is an underground tunnel in the grounds of the chateau where flying bombs are being constructed. David McCallum stars as Squadron Leader Quint Munroe and as well as leading the mission he comforts the wife of his friend who is missing in action. To add to the dramatic tension Munroe and his men learn that allied prisoners are also held in the chateau.

Van R
½ March 6, 2010
"633 Squadron" producer Lewis J. Rachmil let "Girl Happy" director Boris Sagal recycle exciting aerial combat footage from "633 Squadron" for his generic World War II thriller "Mosquito Squadron," starring David McCallum and Charles Gray. This lackluster epic combines elements of 1964's "633 Squadron," principally the plywood built De Havilland Mosquito fighter-bombers, with 1954's "The Dam Busters," with a bouncing bomb designed to destroy a top secret German weapons facility. The Germans are developing the V-3 rocket, and British Intelligence has located the site in the French countryside at the Château de Charlon. Air Commodore Hufford (Charles Gray of "The Rocky Horror Picture Show") assigns Squadron Leader Quint Munro (David McCallum of "The Great Escape") to bomb it with special ordinance. This low-budget melodrama set in England and France has very little to recommend it. Again, 90 percent of the shots of Mosquitoes winging their way over enemy country were appropriated from Walter E. Grauman's classic "633 Squadron." The prefabricated screenplay by Donald S. Sanford and Joyce Perry antes up one surprise, but everything else is formula served up without verve.

Our British heroes are streaking toward their target, a V-2 rocket launching pad, on the French coast as "Mosquito Squadron" opens, using footage from Michael Anderson's "Operation: Crossbow." Incidentally, Anderson directed "The Dam Busters," too. The British destroy the missile launching ramp, but a flight of Messerschmidts blow Squadron Leader David 'Scotty' Scott (David Buck of "The Mummy's Shroud") out of the sky. Quint Munro spots no parachute and assumes 'Scotty' is kaput. Scotty's death elevates Quint to Squadron Leader. Worse, our protagonist has lost a friend who was as close to him as a brother. Scotty and Quint grew up together because Quint's parents died and Scotty's parents raised him. Quint even handed off one of his former girlfriends, Beth (Suzanne Neve of "Bunny Lake Is Missing"), who wound up marrying Scotty. After a reasonable period of mourning, Beth and Quint take long bicycle rides in the country.

Air Commodore Hufford sends Quint off on a reconnaissance mission to photograph the Château de Charlon where the British believe the Germans are developing a V-3. V-2 rockets are falling on London and wrecking havoc. Hufford shows Quint some film footage of a bomb that bounces on any terrain, no mean feat. In real life, the bomb was the genuine article and was called a 'Highball' and had been designed to use on battlewagons like the Tirpitz. Meanwhile, now that the Germans know the British are interested in Château, they drop a canister of film which shows that they have gathered British POWs as hostages against any bombing runs. The revelation that Scotty is among those prisoners shocks Quint. Security prevents him from telling Beth about it. Initially, nobody wants to give the Germans a propaganda coup by killing their own men. Quint devises a way to kill two birds with one stone. Not only will they destroy the laboratory tucked into an underground facility with the 'Highball' bomb, but also they will breach the wall at the Château so the French Resistance can storm the Château. The closest thing to a villain in "Mosquito Squadron" is a German Lieutenant named Schack (Vladek Sheybal of "From Russia with Love") who suspects that the Allies prisoners are plotting something when they all turn out for mass on a Sunday, especially when some of them aren't Catholic. The suspicious Sheybal shows his villainy when shoots a Catholic priest with a machine gun. The POWs overpower their guards and fortify themselves in the chapel as the Mosquitoes appear to bomb the premises.

Quint and his Mosquito Squadron destroy the underground facility, but our hero has to crash his plane. Once on the ground, Quint runs into Scotty, but Scotty cannot remember his own identity, and he sacrifices his life heroically by blowing up a German tank with a bazooka after several others have tried and failed. A wounded Quint makes it back to England and reunites with Beth. As it turns out, Beth never learned that her late husband survived the crash only to die in France as a casualty of a combined British & French Resistance operation. There is a subplot about Beth's younger brother who has to show the film that the Germans have dropped for the benefit of our heroes. When he threatens to spill the beans about Scotty, the authorities lock him up for the duration.

"Mosquito Squadron" qualifies as a hack attempt to cash in on "633 Squadron," "Operation Cross-Bow," and "The Dam Busters." Boris Sagal made a couple of memorable movies and television shows, but "Mosquito Squadron" isn't among them. Worse, "Mosquito Squadron" was cranked out by Oakmont Productions which ground out several cheapjack World War II thrillers, including another Sagal saga "The One-Thousand Plane Raid", "The Last Escape," "Hell Boats," and "Submarine X-1." These movies ranked as half-baked epics with neither a shred of atmosphere nor credibility. Sagal has to stage several shots on a studio set, principally the drive in the country that Quint and Beth take in his red roadster to see Scotty's bereaved parents has our stars seated in an automobile mock-up with scenery back projected behind them. Sagal generates neither suspense nor sense of urgency. The cast walk through their roles like automatons delivering uninspired dialogue written by Sanford who went on to write the equally lackluster "Midway" and Joyce Perry who wrote teleplays for juvenile television shows like "Land of the Lost." McCallum gets the best line in the movie when Hufford asks him about the odds of the mission succeeding: "About the same as spitting in an Air Commodore's eye from an express train, sir." In "Mosquito Squadron," Suzanne Neve and McCallum never generate any chemistry so it is difficult to believe that they love each other. Mind you, it is always a pleasure to watch David McCallum act, but "Mosquito Squadron" gives him very little to do.

Paul D
December 23, 2009
Excellent fighter pilot movie similar to Battle of Britain - except with more depth to the characters rather than an overview of the war in the air.

Shaney L
½ June 24, 2009
An enjoyable war movie with a good cast of actors one being the great David McCallum (Man From U.N.C.L.E.)
It is well filmed and use some great scenes of the Mosquito bomber planes used by the R.A.F.
Worth watching if you are a fan of the World War 2 movies.

Ed H
April 20, 2008
I remember watching this as a child not long after watching 633 Squadron. And if you've seen that classic, you may as well not watch this. The story itself isn't that bad, but McCallum and Neve act out the script so badly and with so little emotion or chemistry that it's tough to feel any kind of sympathy or compassion for them in a complex situation. All that said, as an action movie there are tons of war films far far worse than this. Now, who's for a 21st century remake? :-)

Bill T
½ April 5, 2008
worth waiting for the love scenes to end so that i could see mosquitos in the air (and hear them)

Joshua B
½ March 22, 2008
There's nothing about this movie that makes it stand out from the crowd.

Stewart M
October 14, 2007
The wooden wonder (The Mosquito) strutting its stuff - Herman Goering once said about the Mozzy ""In 1940 I could at least fly as far as Glasgow in most of my aircraft, but not now! It makes me furious when I see the Mosquito. I turn green and yellow with envy.

The British, who can afford aluminium better than we can, knock together a beautiful wooden aircraft that every piano factory over there is building, and they give it a speed which they have now increased yet again. What do you make of that?

There is nothing the British do not have. They have the geniuses and we have the nincompoops. After the war's over I'm going to buy a British radio set - then at least I'll own something that has always worked." - I think this film probably stands testament to that

Robert C
August 20, 2007
Basically a rehash of 633 squadron (they even use the same footage of the navigator being pulled from the burning Mosquito), Mosquito Squadron is a fairly decent 70s war movie that has enough action to keep you interested. It's not going to give you an insight into the real life experinces of mosquito pilots but it's still a decent enough Sunday afternoon watch.
Page 1 of 2