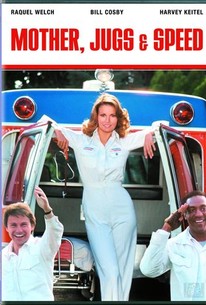 Charles Knapp
as Man With Zipper

Mother, Jugs and Speed is one of those premises that must have sounded great when the agents were explaining it to the studio, but it comes out as an unhappy cross between MASH and As the World Turns.

Mother , Jugs & Speed has no real sting. This apart, the movie does prove you don't have to be sexist to be funny.

The gags get dull, and the mood turns ugly.

If you don't go expecting a lot, you might find the film makes for a half-evening's worth of laidback diversion.

The nightly travails of an ambulance crew stand in for the bigotry, fear, and paranoia of a nation in flux.

An engaging, very funny black comedy gem from the mid 70s, expertly directed by the late Peter Yates. It concerns a privately owned ambulance company called the F&B ambulance company, and there intense competition with their rival the Unity ambulance company for a contract with City of Los Angeles. Bill Cosby steals the film outright with his hilarious performance as "Mother", the streetwise seen-it-all EMT, who is forced to partner up with a shady suspended cop nick-named "Speed", nicely played by Harvey Keitel, and the smoking hot "Jugs," the radio dispatcher who has high aspirations of becoming the first women driver and EMT, played wonderfully by the super sexy and sultry Raquel Welch, special kudos must go to the superb character actor Allen Garfield for his memorable comic performance, as Harry Fishbine the neurotic and money-hungry owner of the F & B ambulance company, and the excellent Larry Hagman, as Murdoch a sleazy, oversexed ambulance driver. The supporting all deliver marvelous performances they included L.Q. Jones, Bruce Davidson, Dick Butkus, Miilt Kamen, Barra Grant, Allan Warnick, and Valerie Curtin. Great music soundtrack with many songs from the period, A cool, raunchy film that is an intelligent mix of slapstick and drama. Highly Recommended.

This movie can't decide what it is. Is it a comedy? Is it a social drama? Is it a romance? An interesting concept I knew nothing about executed terribly. It's about the way ambulance services and emergency medical care were provided and were changing in the 70's. Cosby tries to be funny and has the nickname Mother because he is the responsible one in a crew of ambulance drivers and EMTs. Welch is nicknamed Jugs and is fighting for women's lib. And Keitel is nicknamed Speed. It's hard to tell if he is a bad boy or a reformed good guy looking for a new life, but chances are he's looking for that second chance.

This was a good classic Saturday Morning matinee movie. This movie shows the humorous and tragic side on how tough it is to be an ambulance employee. See it...it is a classic.

Weird comedy with dark moments. Worth seeing for Cosby's and Keitel's performances.