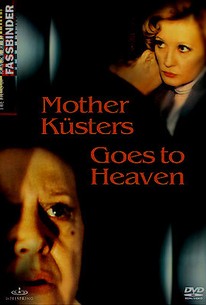 Mother Kusters (Brigette Kira) is the wife of a factory worker who goes beserk one day, killing himself and the boss' son. Mother finds herself a media celebrity, which only serves to make herself and her late husband look like idiots. Later, Mother is "adopted" by a Communist couple who wish to exploit her husband's "act of defiance" for their own purposes. Finally left alone, Mother Kusters decides to stop living off her husband's notoriety and turn into a human being again. Director Rainer Werner Fassbinder used the 1929 film Mother Krausen's Journey to Happiness as a springboard for his own mysoginistic slant on opportunism. The film hit a bit too close to home in his own country, where it was banned from entering the Berlin Film Festival. ~ Hal Erickson, Rovi

No other director understands the strength of mediocre minds as does Fassbinder; when his films don't slip into derision, they can be ineffably moving, as this one is.

Mother Küsters Goes to Heaven ... is a complex look at the social and emotional consequences, both overt and subterranean, of a society based on exploitation.

For those who have not yet dribbled their toes in the cold waters of Fassbinder's psyche, Mother Kusters Goes to Heaven... is a worthy introduction.

The provocative filmmaker manages to show worker exploitation on the left while still hitting hard at the right.

Has pacing issues in the middle, but the viewer's patience is rewarded with two cracking endings.

Fassbinder's satire looks at the life of a middle-aged woman and her family after the death of her husband. Comic at times, dramatic others, and cynical throughout, with quiet desperation undercutting everything, here is a film bored with thinking and thought and the perception of better living through either.