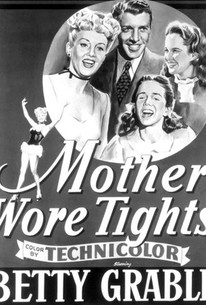 The riotous lives of a turn-of-the-century vaudevillian family provides the basis of this tuneful comedy that stars Betty Grable as the mother, a former trouper who left the stage to raise her daughters. After they are grown, the mother attempts a comeback, much to the embarrassment of one of he daughters who attends the snooty finishing school near the theater where her mother is slated to perform. Mother Wore Tights is a particular favorite among Betty Grable fans.

Will Wright
as Withers

Ann Gowland
as Mikie at Age 3

Karolyn Grimes
as Iris at Age 6

One of Betty's biggest hits does contain some wonderful songs and flashy numbers but she made better films than this.