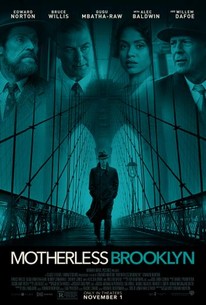 Set against the backdrop of 1950s New York, "Motherless Brooklyn" follows Lionel Essrog (Edward Norton), a lonely private detective living with Tourette Syndrome, as he ventures to solve the murder of his mentor and only friend, Frank Minna (Bruce Willis). Armed only with a few clues and the engine of his obsessive mind, Lionel unravels closely-guarded secrets that hold the fate of the whole city in the balance. In a mystery that carries him from gin-soaked jazz clubs in Harlem to the hard-edged slums of Brooklyn and, finally, into the gilded halls of New York's power brokers, Lionel contends with thugs, corruption and the most dangerous man in the city to honor his friend and save the woman who might be his own salvation.

If that sounds worthy, well-meaning and incredibly dull, I can only say that Norton makes it work, spinning it into a twisting narrative that, admittedly, does require your concentration.

The narrative and the characters are so interesting, and the whole theme...so riveting that Norton's immensely ambitious film succeeds as a compelling exercise in neo-film noir.

Motherless Brooklyn is a love-letter to the long-held focus across film noir on masculinity in crisis, but through Lethem's source material and Norton's deep engagement with it, something genuinely fresh explodes out of seemingly familiar material.

My only criticism is that it does take its time, because it's not afraid to indulge in its story...but those moment are far fewer than I thought, and the story is not hard to follow.

The rest is a sluggish film noir pastiche (the setting of the novel has been inexplicably shifted from the late Nineties to the Fifties) that aims to emulate the jazzy intrigue of Chinatown, but delivers only clichés and screen-chewing vanity.

There's something showy and calculated about the whole thing. Still, it's worth watching...

A satisfying exercise in contemporary film noir. But the great mystery to be solved is very convoluted and takes too many unexpected turns. [Full review in Spanish]

Is a beautiful tribute to film noir. Norton's management does an excellent job of respecting the conventions of the tradition that he honors, while at the same time introducing special elements that give his story a unique touch [Full review in Spanish]

Overall, it's a complicated story that unfolds beautifully.

This isn't my usual fare of film, but I do love a good story that manages to be exciting as well as touching without all of that touchy-feely nonsense.

There are no featured reviews for Motherless Brooklyn at this time.