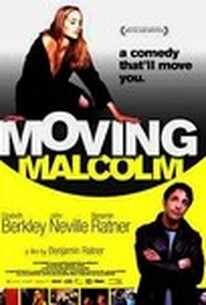 A writer who was dumped at the alter attempts to impress his flaky ex-fiancee by helping her father movie in this dialogue-driven comedy from Canadian writer/director/actor Benjamin Ratner. Gene Maxwell (Ratner) was preparing to exchange his wedding vows when his fiancée Liz (Elizabeth Berkley) vanished without a trace. Three years later, Gene has published a best-selling novel entitled "Fear Knot." Gene lives at home with his dysfunctional parents and autistic sister, and when Liz appears on his doorstep the broken-hearted writer can't help but hope that the flame will be rekindled. But all Liz wants is for Gene to help her elderly father Malcolm (John Neville) move while she jets off to Prague to act in a low-budget sci-fi flick. But while any hope of continuing his romance with Liz proves less likely with each long-distance telephone call he receives, Gene does manage to form a warm bond with Malcolm over the course of the move. ~ Jason Buchanan, Rovi

Occasionally touching, but what it touches isn't your funny bone.

The quietly comic Moving Malcolm lives up to its title by becoming more emotionally involving as it goes along...

Billed as 'a comedy that will move you,' the film is touching, tender and, yes, moving. But as a comedy, it never fully unpacks.

For a purported comedy, Moving Malcolm isn't very funny -- few of its gags don't fall flat on their faces.

There are no featured reviews for Moving Malcolm at this time.