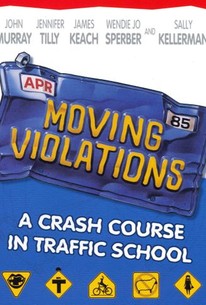 In this flat attempt at comedy by the director of the Police Academy series, Neal Israel, a brash Dana Cannon (John Murray, brother of Bill) lands in a crooked re-education school for delinquent drivers, run by Deputy Halik (James Keach, brother of Stacey). The objective is to lord it over the miscreant drivers sent to the school (wrongly given citations and tickets by cops out to fill a quota, according to opening sequences) and make some money in the bargain. Deputy Halik has already decided to flunk out anyone in his classes, with the objective of impounding their cars and then auctioning off the vehicles to the highest bidders. Dana, the irrepressible new student, manages to unite the other put-upon drivers at the school into a single, determined faction -- and trouble quickly brews.

Jim Hudson
as Man in Mercedes

Freeman King
as Cop with Halik

Casey Sander
as Cop with Joan

... just "Police Academy" all over again, without laughs.

A guilty pleasure with some big laughs. Zany fun.

An enjoyable 80s comedy starring the brother of Bill Murray and the brother of Stacy Keach. You also got a young Jennifer Tilly, two dudes from The Burning, and Marty's sister from Back to the Future. Then, for toppers they throw in Fred Willard. If your into curios and obscure (and not so obscure) comedy character actors, this is the one for you. A niche market to say the least, but still a fun watch.

How many times did I watch this as a kid? Nine bajillion? Every single time it was on cable? I'm not sure why, but I just thought it was the greatest. It's okay. A good, cute time waster with John Murray doing the best impression of his brother that he can muster. Lots of fun familiar faces to be seen like Clara Peller (Where's the Beef?!) and Don Cheadle (!).