Mowgli: Legend of the Jungle2018 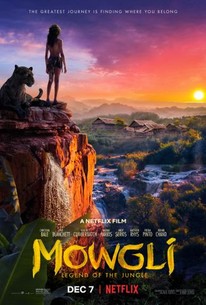 Critics Consensus: Mowgli: Legend of the Jungle brings impressive special effects to bear on the darker side of its classic source material, but loses track of the story's heart along the way.

Critics Consensus: Mowgli: Legend of the Jungle brings impressive special effects to bear on the darker side of its classic source material, but loses track of the story's heart along the way.

Critic Consensus: Mowgli: Legend of the Jungle brings impressive special effects to bear on the darker side of its classic source material, but loses track of the story's heart along the way.

Mowgli: Legend of the Jungle Videos

Mowgli: Legend of the Jungle Photos

Acclaimed actor and director Andy Serkis reinvents Rudyard Kipling's beloved masterpiece, in which a boy torn between two worlds accepts his destiny and becomes a legend. Mowgli (Rohan Chand) has never truly belonged in either the wilds of the jungle or the civilized world of man. Now he must navigate the inherent dangers of each on a journey to discover where he truly belongs. Christian Bale, Cate Blanchett, Benedict Cumberbatch, Andy Serkis, Freida Pinto, Rohan Chand, Matthew Rhys and Naomie Harris lead an all-star cast in this visually spectacular and emotionally moving adventure.

Freida Pinto
as Messua
View All

News & Interviews for Mowgli: Legend of the Jungle

Best-Reviewed Movies by Genre 2018
Mowgli: Legend of the Jungle Is Ambitious but Uneven
10 Stars Who Will Own the Summer 2018 Movie Season

View All Mowgli: Legend of the Jungle News

Critic Reviews for Mowgli: Legend of the Jungle

Unlike Jon Favreau's insipid 2016 live-action retread... this live-action adaptation of Rudyard Kipling's classic about a feral Indian boy reared by wolves teems with flesh, blood, and mud, conveying a true sense of danger and adventure.

The film feels painfully incomplete, from its frequently told story to its weak visuals.

The movie is not without its flaws, but its failures are far more fascinating than whatever made Favreau's safely engineered adaptation a success.

The film is not without spectacle, but it is strangely without soul.

You have to wade through a whole bunch of effects that feel ... abandoned before they were fully baked.

While the sententious script is at best serviceable, dark knots at the heart of the story are well worth grappling with.

My only hope is that this version of the classic tale doesn't get forgotten - its darkness is heavy but there's beauty within it.

A bloodier alternative to the classic Rudyard Kipling novel for those who like a little grit with their fairy tales.

Of all the versions of The Jungle Book, Mowgli sure is the runt of the pack.

If you can relate to the gravitas that Serkis lends to a much-loved jungle tale, Mowgli: Legend Of The Jungle is the film for you.

There's nothing charming and whimsical about being a child lost in the animal kingdom. And there's certainly no singing.

Audience Reviews for Mowgli: Legend of the Jungle

Sometimes second place might as well be last place in the film industry. Pity Andy Serkis and the years he spent making a live-action, mo-cap enhanced version of The Jungle Book only for Disney to scoop him years in advance and deliver a billion-dollar hit. It's impossible not to compare the two and unfortunately Serkis' passion project is found wanting in many areas. For starters, there's far less Shere Khan (voiced by Benedict Cumberbatch), which is a shame. He's really only in the film for very little. I think Cate Blanchett is miscast as the voice of the snake, Kaa, who acts like a grand keeper of the jungle's history and future. I'm not sold on Serkis as Baloo, a grumpy paternal figure present from the beginning that trains the wolf pups so they can join the pack. The middle half-hour Mowgli spends in the company of man with a kindly poacher also feels like the movie is spinning its wheels. It keeps the rest of the jungle on hold. There are some rather dark asides that can be quite surprising, from wolf pups plummeting to their doom, bloody scars, cute severed heads to haunt your dreams, and three separate occasions where characters will watch the light vanish from a dying animal's eye. It's definitely a more brutish, cruel, and dangerous world, but at what greater expense? The characterization doesn't add up to much. The character relationships are minimal. The CGI creatures and settings look unfinished. The whole enterprise feels rushed even though it's been on the shelf for some time, which may be why the studio was eager to sell it to Netflix for a cool $90 million. You'll watch Mowgli and nod, generally entertained, but questioning whether it's 90-million worth. Nate's Grade: C+

I am gonna be honest. I knew after the initial moments that this would not work for me. For some odd reason this movie is trying to tell Mowgli's "real story" (I am not familiar with the source material) and yet decides to give all animated animals extremely human features. That's deep into uncanny valley and incredibly distracting. That's particularly shocking and disappointing considering this is motion capture legend Andy Serkis's film. Or was that actually the problem? It doesn't help that the idea to tell a darker and more mature version of the story makes for some highly uncomfortable scenes. Kids should definitely skip this one, I know I wished I did. It simply works on no level whatsoever and is just dire and underwhelming.

An engaging take on the old Kipling tale, helmed by Andy Serkis (of "nobody knows who I am cause I always wear so much makeup" fame), a CGI-rendered jungle extravaganza. Fun. Try and guess the voices behind the animations.

Due to the fact that this film has been released on Netflix, I fear that many people will see the release of Mowgli as a film that's just ripping off the idea of Jon Favreau creating a live-action version of The Jungle Book back in 2015. While it does seem that way on the surface, this is a film that was in production at the same time, but since Disney was the larger company backing the film, Mowgli was put on the shelf for a few years. While I personally don't believe this movie is quite as well-made as The Jungle Book (2015), I also think it's a real shame that this movie didn't make it to theatres worldwide. Released by Netflix, people are now able to experience this new version of that classic tale and I think it's well worth your time. Lost as a child, young Mowgli (Rohan Chand) is adopted by a pack of wolves and raised in the jungle. Befriending many different species of animals, he grows up to learn their languages, not knowing that he's really a human. This film explores the classic story points of the original classic, with hints of the sequel, and a fresh third act that has been tinkered with to fit a darker storyline. This is where I felt the film excelled the most. Deviating from the source material is what's needed when you're trying to be original with something that has been done so many times in the past. This is a much more gritty and realistic take on this premise, and if it wasn't for Jon Favreau's version a few years ago, this would easily be one of my favourite renditions of this story. Sadly, Mowgli does suffer from looking far too similar to the Disney version and the motion capture isn't quite as perfected as it was in that film either. Aside from taking a few risks in terms of storytelling, this movie falls just short of everything that has already been done in 2015. That being said, I truly believe this movie would've been talked about more and much more well-received if it had stuck to its original release date and attempted a theatrical run. This is a film that clearly had hard work put into it and I believe the final product accentuates that very strongly. Where I was most impressed with this film was in the performances. While I appreciated Neel Sethi very much in the role of Mowgli back in 2015, Rohan Chand is far superior in my opinion. Due to the darker nature of this film, he is given a few opportunities to shine and he shows that he really has range, and acting against nothing even solidifies that more so. With the addition of vocal talents in Christian Bale, Cate Blanchett, Andre Serkis, Benedict Cumberbatch, and Naomi Harris, I was enthralled whenever any of the animals were speaking. There are some genuinely terrific characters moments between these animals and this is something that Andy Serkis has clearly perfected throughout his career as an actor. He has now stepped into the director's chair and I think this was a great first outing for him as a feature filmmaker. In the end, Mowgli isn't going to make many top ten lists for the year of 2018, but if you're looking for a deviation of this story and have enjoyed past renditions, I can recommend this quite highly. That being said, the core story is pretty much everything you've seen before. Mowgli is constructed in a memorable and new way which makes it so enjoyable, but if you're looking for a completely fresh movie, you won't find it here. I really enjoyed watching Mowgli for what it was. It's now streaming on Netflix and I think it's worth your time.

Mowgli: Legend of the Jungle Quotes