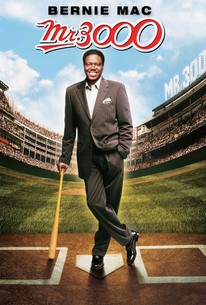 Critics Consensus: Bernie Mac demonstrates he can play the game even if the movie's a few innings short of a complete game.

Critics Consensus: Bernie Mac demonstrates he can play the game even if the movie's a few innings short of a complete game.

Critic Consensus: Bernie Mac demonstrates he can play the game even if the movie's a few innings short of a complete game.

Directed by Charles Stone III, Mr. 3000 revolves around over-the-hill baseball star Stan Ross (Bernie Mac), who retired after making what he thought was his 3,000th base hit for the Milwaukee Brewers (i.e. the exact amount of hits it takes to qualify for the Hall of Fame). Though he shocked his teammates by quitting in the middle of the game, certain that his Hall of Fame position was in the bag, complications arise when he discovers that three of his hits during his ten-year career had been disqualified. Known as Mr. 3000, the 47-year-old, out-of-shape ball player returns to the game intending to stay only as long as it takes to get the hits he needs, but something unexpected happens along the way -- he rediscovers his love for the game, and begins to serve as a mentor to one of the younger players. Mr. 3000 features Angela Bassett, Paul Sorvino, Michael Rispoli, and Evan Jones in supporting roles.

This fuzzy baseball story about a conceited player (Bernie Mac) who comes out of retirement to fix his record (he's three hits short of the magic three thousand) is a major letdown.

Bernie Mac plays a baseball-star version of his corrosive TV-show persona in Mr. 3000, a comedy that's essentially an extended ad for ESPN. Ironically, though, the insertion of real-life media provides the film's few laughs.

This feature-length commercial for Major League Baseball covers all the cross-marketing bases.

A mild and forgettable baseball comedy.

There are no big surprises, but Mac and director Charles Stone III hit all the right dramatic notes, and Angela Bassett is reliably smart and sexy as Mac's love interest.

This weeks discount dandy is Mr. 3000, an amiable comedy that features a nice turn by Bernie Mac that allows it to overcome its obvious formulaic shortcomings.

An arrogant former sportsman learns a lesson in humility in this predictable comedy.

Mac's rascally charm and deceptive gravity give promise of more substance than the movie finally delivers.

Bernie Mac has a talent for cussing. It's a talent that can take you pretty far in the entertainment industry, but it still can't carry a movie, as Mr. 3000 demonstrates.

The movie may not rank in the Hall of Fame for baseball flicks, but Stone and his star do honor to the heart of the game, and provide enough comedy curve balls to stay above the fray of the encroaching clichés.

Mac gets a rare opportunity to showcase his true dramatic range as an actor.

Essentially a "Major League" "rethinking" (meaning they blatantly stole the plot), with the story emphasis concentrated mainly on the old timer's personal redemption. That being said, its a pretty good sports movie, Bernie Mac literally astounding as the big cheesy ham in love with himself who learns better. Definitely a keeper with great character performances soundly backing up Bernie's play.

As far as baseball comedies are concerned, Mr. 3000 is nothing compared to the likes of Major League or The Sandlot but is nonetheless a worthwhile film to watch due to good on-screen presence by lead actor Bernie Mac. The comedy is good here, but at times there are parts where the comedy could have been improved upon. The film manages to overcome its flaws by its good story and well balanced cast that just light up the screen. Now this isn't a perfect comedy, but it is definitely better than many other films in the genre, and it is better than the Benchwarmers and the Sandlot sequels. Bernie Mac is good here and is perfect for the role that he plays. The film has a good mix of comedy into its plot, but like I've said, some parts it lacks a bit and there was room for improvement. The film is worth seeing if you love the sport or a well acted comedy with heart. The film is entertaining from start to finish due to its plot and effective cast. If you want mindless entertainment, this is a perfect film to watch. Although the comedy is at times slow, Bernie Mac is fun to watch and he is perfect in his performance. If the film would have been rewritten and the jokes would have been reworked slightly, then this would truly have been a memorable comedy. As it stands, it's a good comedy, but one that had the potential of being a much better film. But Mr. 3000 is not a bad film, and it is quite good and is quite frankly underrated. Give it a shot; you might enjoy it for what it's worth.

Big Horse Borelli: You know, a lot of people said that Stan only looked out for himself, that he wasn't a team player. But I'm here to tell you, if you get 3000 hits, you don't have to be a team player. If you have a lifetime .314 average, you don't have to be a good guy. If you lead the league in batting for three years, you can be the biggest jerk in the world! Bernie Mac stars as a baseball player who quit the game after getting his 3000th hit. Problem is, years later, when up for a spot in the hall of fame, it is learned that he is in fact 3 hits shy of 3000. Now, to keep his title as Mr. 3000, he has to get back in the game, despite his past ego making him unlikable. The movie itself is somewhat formulaic, with an ok enough way of playing itself out, but Bernie Mac is enough of a good presence to make this movie enjoyable. Tom Arnold: Hey, we're sorry about all that stuff we said before you hit that homer... Stan: Yeah, you wouldn't be anywhere if it wasn't for Roseanne.