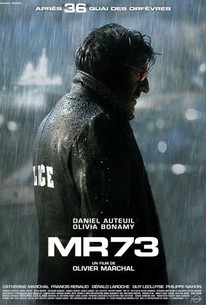 A cop on the edge of an emotional collapse is on the trail of a violent madman in this edgy crime thriller from French writer and director Olivier Marchal. Charles Subra (Philippe Nahon) is a habitual criminal who, after serving twenty-five years in prison on a sentence for rape and murder, is up for parole. While Charles insists he's seen the error of his ways and wants to repay society for his crimes, Justine (Olivia Bonamy) isn't buying it -- Charles murdered her mother and father while she watched, and she writes him a long letter explaining in detail why she wants him to stay behind bars. Charles is granted parole anyway, but it soon becomes clear that the clever criminal fooled the prison authorities -- he still has a taste for murder and wants to kill again, starting with Justine. Louis Schneider (Daniel Auteuil) is a police detective who meets with Justine and helps protect her from the madman on the loose, but he's not the best man for the job these days -- shattered by the sudden death of his wife and child and haunted by a serious of brutal murders he's been investigating, Louis's psyche is in tatters and he's only marginally more stable than the criminal he's trying to catch. Director and screenwriter Olivier Marchal was inspired to make MR 73 by his own experiences as a police officer in the early '80s; the title is police slang for the Manurhin 73, a standard handgun for French beat cops in the '70s and '80s. ~ Mark Deming, Rovi

There are no critic reviews yet for MR 73. Keep checking Rotten Tomatoes for updates!

There are no featured audience reviews yet. Click the link below to see what others say about MR 73!