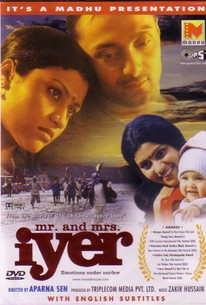 A bus rolls down a narrow, winding, hilly road. On board is Meenakshi Iyer with her nine-month old son, Santanam. With them is a Muslim named Raja Chowdhary, a wildlife photographer who was introduced to her through a common friend before boarding the bus. Since Meenakshi is traveling alone with her infant, Raja is given the responsibility of looking after her and everyone on the bus assumes them to be a couple. When the bus is stopped by an angry mob of Hindu extremists on the prowl for Muslims, a chill runs down Raja's spine. Born and brought up in an orthodox Brahmin family, Meenakshi is shocked to learn of Raja's background. She starts to maintain her distance from him. But fate has other ideas. Looking at the inhuman way in which Muslims are being killed, she can't help but save his life. She lies to the Hindu extremists, saying that they're a married Hindu couple, "Mr. and Mrs. Iyer."

There are no critic reviews yet for Mr. & Mrs. Iyer. Keep checking Rotten Tomatoes for updates!

There are no featured reviews for Mr. & Mrs. Iyer at this time.