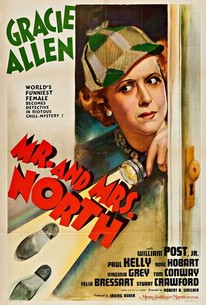 "Mr. and Mrs. North" started as a series of comic articles about a Park Avenue married couple, written by Richard and Frances Lockridge. One of these articles was "The Norths Solve a Murder", which was adapted as a stage play by Owen Davis Sr. and was later spun off into a popular radio and TV comedy-mystery series. The Davis play made it to the screen in 1941 as Mr. and Mrs. North, with Gracie Allen (in a rare appearance without George Burns) as dizzy socialite Pamela North and William Post Jr. as her long-suffering husband Jerry. Upon returning home from a vacation, Pam North opens her closet door--and out pops a dead body. As it turns out, all the suspects are close friends of the Norths, a fact that encourages Pam to gently interfere in the ongoing murder investigation conducted by Lt. Weygand (Paul Kelly). A second murder serves only to send Pam off on another flight of convoluted logic, but somehow or other the case is solved and justice is served.

At times the comedy is forced.

Gracie steps away from George momentarily but is as daffy as ever. She bulldozes her way through this breezy mystery befuddling all in her wake.