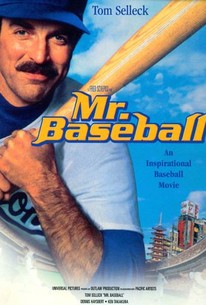 A former American baseball star, now considered a has-been, is signed to play for a Japanese league in this comedy. Cultures clash as the player at first fails to take his new teammates seriously, but he soon finds his love of the game rejuvenated by their fresh perspective.

Sean McDonough
as Himself

Carrie Yazel
as Coed in Bed

Yuji Inoue
as Player
View All

Why did I like it? Maybe because style is as important as story in a movie like this, and Mr. Baseball is not without a certain flair.

Best for baseball fans; anyone else is unlikely to find this dated tale very engaging.

As a movie star, Selleck steps up to the plate again and again, swings and misses. Mr. Baseball could be his clumsiest strikeout yet.

If Mr Baseball were a Major League team, it would be the Chicago Cubs; friendly, occasionally successful, but never likely to amount to much more than a .500 season.

So, that's what happened to Mr. Selleck's career!

Stupid comedy that's insulting to both Baseball and the Japanese.

In all honesty this movie looked very much like a 'Major League' clone judging by the title and poster, hell they even cast Dennis Haysbert who played the menacing Pedro Cerrano in that movie. So is this a crazy kamikaze comedy with over the top characters, wacky situations and foul language? well no actually.Believe it or not this is actually a sensible light-hearted romcom which showcases the cultural differences between Japan and their baseball traditions, and America and their baseball traditions. Tom Selleck plays the obligatory aged fading baseball star who is transferred to Japan to play professional baseball whilst also becoming the clubs poster boy. Naturally Selleck's character is against this move and has a hard time getting to grips with the cultural differences both on and off the ballpark. Spoiler alert (as if you need it)...eventually he comes around with the help of his new love interest and helps the team...well I'm sure you can guess. Yes the tale is a predictable one that has been covered by virtually every sports flick ever, but that's not the point of the movie. The main point here is providing an insight into Japanese culture and how they play and watch the game of baseball, its like the sport version of 'Lost in Translation'...almost. Just like that film this story delves deep into the Japanese traditions, routines and rituals that make up their sport, how the Japanese made baseball their own. This naturally provides many giggles with Selleck's big bold brash arrogant cowboy-like character stepping on many toes and accidentally insulting everyone or harking bad luck. Its not all giggles though as we see much of Nagoya and its surrounding areas, how Japanese people live in parts and indeed how they watch baseball...munching on bowls of noodle meals with lots of colourful fanfare mainly. Its actually very interesting and I enjoyed watching these segments, being interested in Japan helps I guess. For me the one thing I didn't really like was Selleck's character. I realise this guy is suppose to be a cocky hotshot star player and the whole point of the movie is to have him be a jackass...but boy is he an unlikable jackass! He obviously doesn't take the Japanese game seriously and treats the players, staff, media and coach with disrespect, this of course sets up the plot twist midway through. But generally I found his character to be whiny, rude and obnoxious, he never even gives the Japanese culture a chance, he constantly takes the piss and ignores the rules. Now lets be serious here, I know this is just a movie but I think even the most arrogant player/person wouldn't really act like this from day one. Sure over time people could lose their rag under strange circumstances, under stress with different cultures in a foreign land, but I think most would give it a shot and at least be polite to a degree to start with sheesh! The fact that he doesn't like anything about Japan and constantly moans about how he hates it even though he's a popular sports icon earning money just makes him unlikable in my book. Sure its a come down for this character but he's still treated like a star and everything is provided for him, not too shabby really. Anywho apart from the bitchy Jack Elliot (Selleck) the other cast members are very good and add much gravitas to this soppy tale. The best of these easily being Ken Takakura as the cliched hard nosed team coach who must put up with Elliot's sulky behaviour. Think of this guy as a Mr. Miyagi type character, he doesn't say much, grunts a lot, looks very serious and stern all the time, hides a few tricks and in the end wins your heart (much more so than Selleck's character). The film isn't as cliched as you'd think at times, there is the slimy ponytailed agent of Elliot who you'd swear blind will turn out to be the bad guy and somehow screw Elliot over...well you'd be wrong. Its definitely a solid movie and its nice to see baseball through the eyes of another country even though there aren't too many outside of the US to choose from. The baseball sequences are visually pleasing and realistic whilst the action is as you would expect with lows followed by a training montage and then highs. The final scene gives you a reasonable adrenaline boost as the entirely predictable plot unravels before your eyes. Relaxing fun from the land of the rising sun, its just a shame about the main character being a complete douche.

I could almost say Tom Selleck is a hero of mine, mainly due to his mustache and chest hair that are constantly finding ways to present itself to the audience, it's ridiculous and borderline impressive. Decent fish out of water film with classic cheese.

This movie wasn't funny at all, and not even that entertaining. I haven't seen many Selleck movies, but this one didn't leave a good impression. Oh well, least we see a nice naked Japanese butt take a step or two at one point.

Another lame fish out of water comedy that sees an ageing baseball star relocated to Japan. Not one cliche is left unturned.