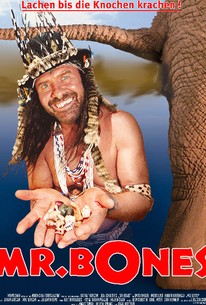 What would happen if a white child with a couple of odd talents -- one prophetic and one malodorous -- was found and raised by an appreciative, yet hapless African tribe? South African director Gray Hofmeyr attempts to find out in his 2002 family-oriented comedy entitled Mr. Bones. Shortly after surviving a plane accident, a mysterious youngster is discovered by the Kuvuki tribe just as the babe is fending off a hungry lion with explosive flatulence. This deed duly noted, the tribesmen adopt the child as one of their own and sometime later discover the boy also has great skill in divining the future from reading bones -- something the tribe considers a greatly respected skill. Henceforth, the boy is dubbed Bones (as an adult, played by Leon Schuster) and some years later is ordered by the tribal king Tsonga to seek a previously unknown heir Bones predicted to exist. Bones sets out to locate the heir, and decides that touring golf pro Vince Lee (David Ramsey) is the man, much to the consternation and protestations of Lee's agent, as well as a gambler with a lot of money at stake in Vince's victorious appearance at a local tournament. Mr. Bones was selected for inclusion into the African Horizons program at the 2002 Montreal World Film Festival.

There are no critic reviews yet for Mr. Bones. Keep checking Rotten Tomatoes for updates!

There are no featured audience reviews yet. Click the link below to see what others say about Mr. Bones!