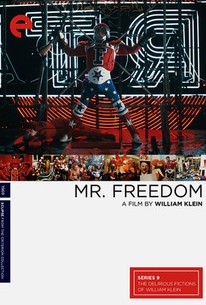 Mr. Freedom, a pro-America superhero who fights for God and country by beating, robbing, raping and killing anyone who looks like they might disagree with him. When he hears that France is in danger of falling to the Commies, Mr. Freedom heads overseas to set things right. When the welcome he receives isn't quite as warm as he expected, he gives up hope of steering the French away from the Reds and decides to salvage what he can by destroying the entire country. -- © Jean-Marc Rocher

A poisonously funny film that hasn't lost any of its bite, it makes for the perfect anti-Fourth of July viewing.

Even the film's few satirical thoughts, though, are left dimly trailing in its curdled mixture of would-be sophisticated larking and kindergarten political caricature.

As subtle as a double-time "Stars & Stripes Forever," "Mr. Freedom" is a broad political satire that uses ridiculous superheroes to symbolize clashing Cold War countries. Mr. Freedom (John Abbey, who presumably was cast for physical size rather than acting skills) is a red, white and blue-clad, sloganeering meathead who is sent overseas to defend France from invading Communists. France is dryly described as the "white man's burden," and the stereotype of the country being a wartime doormat is cruelly milked. When Mr. Freedom arrives, he is given a raucous welcome by the crusader allies already on site. Like him, they dress in bizarre, patriotic outfits accessorized with what looks like leftover padding from linebackers, baseball catchers and motocross riders. Most important among them is Marie-Madeleine (Delphine Seyrig), the widow of the group's former figurehead Captain Formidable. She's game to wear a huge orange wig, but is deliciously alluring all the same (arguably, she is also the film's only solid performance). Another member of this tribe is "Mr. Drugstore," played by none other than legendary songwriter Serge Gainsbourg (who also wrote the score). He doesn't have many lines, but he delivers a radio spiel at one point (in English!) and is allowed to cut loose with some silly physical humor. Donald Pleasance adds a small role as Mr. Freedom's distant commander, but only appears in closeup via the monitor of his protÃ (C)gÃ (C)'s wrist communicator. Mr. Freedom's chief adversaries include Super Frenchman, Moujik Man (standing for Russia) and Red China Man. Moujik Man (what is Philippe Noiret doing here?) wears an absurdly puffy, Michelin Man-style outfit, while Super Frenchman and Red China Man are both presented as life-size balloon figures (seriously). Red China Man -- a giant, snorting parade dragon rippling with gusts from whatever fan system is enclosed inside -- really can't be done justice with words. Be forewarned: This is hardly a pro-America movie. Mr. Freedom is consistently portrayed as a dimwitted cheerleader who speaks in vacuous clichÃ (C)s -- he's like "The Tick" come to life. He's also casually sociopathic about killing anyone who poses the tiniest obstacle to him. Yet for awhile, Marie-Madeleine's young son is the only person who realizes what a bullying creep he is. Meanwhile, writer-director William Klein ("Who Are You, Polly Magoo?") takes numerous potshots at Madison Avenue and inserts all sorts of garishly packaged products into the background. In one crazy scene, Marie-Madeleine revives Mr. Freedom from a bloody, stigmata stupor by stuffing him with a revolting mound of cereal poured from a box marked Corn Flakes on one side and Rice Krispies on the other. Another scene takes place in a girlie-staffed supermarket that looks like Andy Warhol's worst pop-art nightmare. "Mr. Freedom" is so uniquely insane that one feels guilty trashing it, but it's really not much more than a campy, '60s-era laugh. Still, the costumes alone make it a can't-miss spectacle.