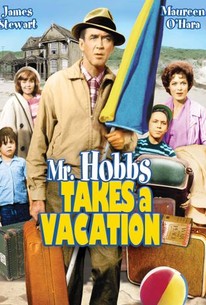 Screenwriter Nunnally Johnson adapted the novel by author Edward Streeter, whose work was also the basis of Father of the Bride (1950), into this domestic comedy. James Stewart and Maureen O'Hara star as Roger and Peggy Hobbs, a St. Louis couple with a large brood who desire a seaside vacation. Renting a cottage by the ocean is just the first step in a summer fraught with disasters, including a couch potato son, a shy daughter with newly installed braces, a pair of grown daughters who have married badly, and a local yachtsman with eyes for Peggy. Not to mention the ramshackle state of the shoreline abode, Roger and Peggy's new grandparent status, and incidents involving a sexy neighbor, a sailboat regatta and bird watching. ~ Karl Williams, Rovi

Sherry Alberoni
as Girls in Dormitory

True Ellison
as Girls in Dormitory

Doris Packer
as Hostess
View All

Since there are no recognizable humans in it, Mr. Hobbs is really strictly for the bird watchers.

This is a fun picture, although it misfires, chiefly in the situation development department.

A wholesome family comedy with Stewart and O'Hara as a couple whose quiet vacation becomes a noisy free-for-all for the kids.

Some of the incidents are funny, some are so-so, some are flat. And, of course, in the end, it is concluded that for all this, the family is still strong.

Maybe this isn't 60s family entertainment at its absolute worst, but it's still pretty awful.

Whirlwind direction, witty quips from screenwriter Nunnally Johnson, and the seasoned Stewart's likability ensure that the laughs keep coming in this fun film.

really good flick, that birdwalk gets me every time

Was this supposed to be funny? I found it to be a damn headache. The funniest part was the bird watching bit. But other than that I thought that it was trying. It seemed like the Simpsons would parody, or already have. Personally, I would have killed everyone in that family except for Stewart and O'Hara...

James Stewart and Maureen O'Hara shine as a couple in this 60's comedy. A family goes on there last family summer vacation in southern CA to a friend's old home on the beach. Many things test there sanity...it is a funny and well done movie