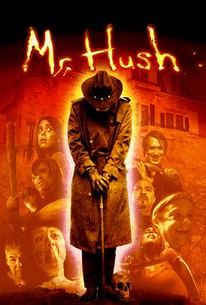 What is the ultimate horror? For Holland Price, it is losing everything he loves. Holland is a devoted family man whose life is turned upside-down by a horrifying figure one Halloween night. Holland spends ten years searching the country, filled with self-torment and suffering, as he is haunted by his nightmares of that terrible night. He is drawn back to the small town of Layton, PA where he finds work in a restaurant owned by his friend, Mac. There he meets Debbie and begins to regain stability and peace in his life. But once his life adjusts to normal, Mr. Hush and his henchman, Stark, arrive. Driven by a lifetime of hatred toward the Price family, Mr. Hush continues to taunt Holland. But why? Follow our hero on his emotional rollercoaster ride as he descends into a dank and villainous world to see the face of darkness for what it is the face of Mr. Hush. Two men, fueled by love lost, collide in this chilling battle of good vs. evil.

It's too bad first time director David Lee Madison can't lay some responsibility on the screenwriter for the horrible script he was saddled with: he's got only himself to blame for this tedious mess.

Sometimes if I'm not to sure about a movie I'll watch a trailer to see if I think it's worth renting or watching.I rented Mr. Hush without watching a trailer....... HUGE mistake! I really tried to give this movie a chance but after about 15-20 minutes I was completely bored & kept it on as background noise while I did other things.Sometimes.I forgot I even had it on.If you want to torture yourself for 1 hour & 20+ minutes then I suggest you watch this movie