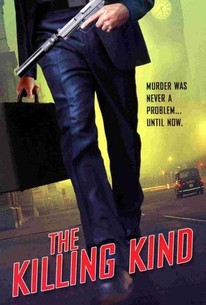 Noted for shooting such films as Exotica, Affliction and X-Men, cinematographer Paul Sarossy makes his directorial debut with this existential crime thriller about a killer struggling to reclaim his soul. Jon is a quiet, nice, and seemingly conventional character who no one would suspect is a hired killer. When he makes such a confession to his mates one drunken evening at the local pub, no one believes him. But a hired killed he is, working for a mysterious figured named The Tattooed Man, whose proclivity for philosophy is match only by his lust for cruelty. When Jon runs into his old high school chum Andy, who is happily married to Jon's first love Cathy, he begins to awaken from his emotional and spiritual torpor. This film was screened at the 2001 Toronto Film Festival.

There are no critic reviews yet for Mr. In-Between. Keep checking Rotten Tomatoes for updates!

There are no featured reviews for Mr. In-Between at this time.