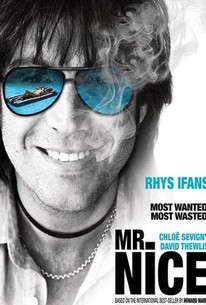 Howard Marks (Rhys Ifans) was a young Welshman studying at Oxford when he discovered there was something unusual about his dorm room -- it had a secret passageway that led to a storage space used by one of the school's top marijuana dealers. Marks and the dealer struck up a friendship as he became an enthusiastic customer, and a few years later, when plans to bring a large cache of hashish into England via Germany went haywire, Marks stepped in to help and was introduced to a circle of big league marijuana traffickers. Mr. Nice was adapted from the autobiography by the real-life Howard Marks; Marks is good friends with Rhys Ifans, who was cast to play him in the film. ~ Mark Deming, Rovi

Ania Sowinski
as Maureen
View All

Though the film takes a while to cast its spell, writer-director-cinematographer Bernard Rose's close observation of Marks and those around him becomes increasingly involving and allows Rose to comment on the widespread failure of the war on drugs.

The writer-director tells the story with verve and small-budget ingenuity.

Ifans looks 20 years too old for the part, and the problem with the movie is it seems so desperate to be made that it barely cares that he spends half of his time miscast.

[Ifans] captures the character's charisma and cool, and it's fun to ride shotgun with him. But the script isn't pointed enough to drill beneath the surface.

Effortlessly captures the looks, attitudes and the various mentalities of the period from the late 1960s and early 1970s, through the transition from the hippie era into the Studio 54 days, followed by the Just-Say-No retrenchment of the 1980s.

Writer-director Bernard Rose lets the picture bop along a little too loosely, but the vibes are good.

Ifans does a credible job of showing us how Marks moved from one lucrative situation to another... But the movie suffers from the usual clichés and tropes of its genre.

It's frequently funny, it's affable and charming in that way all the best British comedies always are and it's a retelling of a story quite remarkable in that someone undertook it and lived to tell the tale.

Part of the problem with Mr. Nice is that the endless sequences of [Howard] Marks and company moving, packing, hiding or hiding drugs lead to a muddled, disconnected narrative that lacks emotional impact.

I'd recommend the similar "Blow" first, and I didn't even like that movie much.

Overly relying on narration, Mr. Nice tells much more than it shows.

Ultimately, Mr. Nice doesn't transcend its genre, but the title character is a bright addition to the cinematic rogues' gallery of charmers for whom the real high isn't the drugs or the cash, but the con.

Howard Marks: A dealer is really just someone who buys more dope than he can smoke. And I have to say, I'm ashamed, I tried to smoke it all. There was just too fuckin' much of it. "Most Wanted. Most Wasted." Mr. Nice is a movie I thoroughly enjoyed, and more than anything, it really made me want to read Howard Marks' book. There's a few annoyances throughout and from what I've read, it isn't nearly as good as the book. On a subjective level though, I really loved it. This is material that is worth showing. It's fun to watch, it's insightful(probably not as much as the book I would imagine), but more than anything I loved Rhys Ifans and Chloe Savigny.  Mr. Nice is the life story of Howard Marks. Marks learned about marijuana from a guy while attending and graduating from Oxford. After graduating, he takes a teaching position that isn't getting him much money. So when that guy who introduced him to the magical plant gets busted, he turns the business over to Marks. Marks takes over and the business flourishes. The title, Mr. Nice, is based on one of Marks' aliases and I would be led to believe it is why there's a popular and powerful strain of marijuana called just that, Mr. Nice.  A lot of the criticism for the film seems to be from those who have read the book and I can't really deny that the film is a bad adaption because I haven't read the book. I will now, but as of seeing the movie, I haven't. So luckily I watched this before because based on those opinions, I wouldn't have cared for it nearly as much. If you're at all interested in drug smuggling or maybe just the man himself, give this film a look. I loved the style, loved the dialogue, loved the cast, and loved the source material. Howard Marks was an extraordinary man and his life makes for an extraordinary story.

As Howard Marks(Rhys Ifans) tells his rapt audience, his high intelligence allowed him to not only escape regular school beatings and rugby but also his depressed Welsh village. At Oxford University, he turns on, tunes in, and almost drops out before being given a second chance. After that, he takes up a boring life of near poverty as a teacher with Ilze(Elsa Pataky). But then he gets a fateful phone call from his friend Graham(Jack Huston) from jail in Germany who wants him to do a small favor of driving a drug-filled car back to England. After this successful transit, Howard ponders a better distribution model. Enter James McCann(David Thewlis). "Mr. Nice" gets off to a good start in firmly establishing its protagonist's psychological motivations for actions in his future life.(Whether he confirms to colonial stereotypes or confounds them is a matter for another debate.) Stylistically, the movie seeks to be of the time it is set, first in black and white and then with a healthy amount of rear projection with spotty references that occasionally set the time like Bloody Sunday before going into the future at supersonic speeds on the Concorde as the characters seemingly never age. After all of that, as presented here, Howard Marks does not seem that remarkable for a drug smuggler, making him little deserving of a biopic. And the movie errs by not fully developing the more gonzo elements of the story like the IRA/MI6 connections that involve an atypically unhinged David Thewlis.

"43 Aliases. 89 Phone Lines. This is the Story of Howard Marks." Based on the hugely successful autobiography of the same name, Mr. Nice tells the incredible story of the life of Howard Marks, "the world's most sophisticated drug smuggler."

REVIEW
Rhys Ifans plays Howard Marks in a movie based around the Welsh drug dealer's biography. We go from Marks' entry to Oxford (where he first discovered the delights of smoking dope) to his brief brush with conventionality, followed by his first occasion of importing a Mercedes full of cannabis, his association with IRA gunman and drug importer Jim McCann (David Thewlis), and assorted escapades, brushes with the law, assumed identities and so on. Throughout all this he continues to father additional children with long suffering partner/wife Judy (Chloe Sevigny), and he appears to be a good father, loving and loved. What to make of this? Well, it always holds the interest, it is well acted by all involved (albeit Sevigny's role is pretty thankless), and much of it has a reasonable sense of period (in particular, Ifans is inserted into period newsreel footage with mixed results), with some good use of period music (John Lennon's "God" is particularly well placed). It is sometimes amusing, seldom gripping, and be non-judgemental - Marks' exploits are presented to us and we are left to come to our own conclusions as to how right or wrong he was. The illegality of his actions is not condemned: however, although there are several points where one gets the feeling that the filmmakers' sympathies lie with the legalising marijuana lobby, it is difficult not to take on board the drastic consequences for Marks and his family when he is apprehended and the excuses no longer work. I ended up being as morally compromised as the movie - it was a worthwhile exercise to make the film, I think, but I am no wiser as to where Marks would stand if we were all to line up and be judged. And maybe that is how it should be.