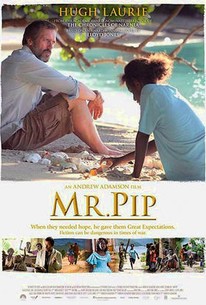 Based on the best-selling novel, Mr. Pip is a film by Andrew Adamson (Chronicles of Narnia, Shrek) and stars Hugh Laurie ("House M.D.", Monsters Vs. Aliens) as Mr. Watts, the last Englishman remaining in a tropical village in Bougainville during its civil war in the 1990s. He begins to teach the local children by reading them Great Expectations, by Charles Dickens. Matilda, an imaginative young girl (played by newcomer Xzannjah), is transported into the story of the novel, believing that Dickens' character Pip is her friend. Matilda's "Pip" world is an extraordinary fusion of Dickens' Victorian London with the environment and people she knows on the island. This wildly imaginative hybrid place is set alongside the film's unflinching portrayal of the horrors of war. Matilda's passion for storytelling brings terror to the village when Pip's identity is misunderstood by the invading army. Ultimately, her courage and imagination must sustain her if she is to survive. (C) Freestyle

It's a weak-tea imitation at best.

It's not a perfect film but it's not often you get one that sings literature's praises so eloquently, and that makes up for a lot.

Mr. Pip doesn't start going seriously awry until its second half, when things get more eventful in ways that are compacted from the novel yet seem more disconnected.

Adamson mixes magical realism with hard-hitting historical drama in a way that feels both contrived and questionable, even if the filmmakers clearly have their hearts in the right place.

Adapted from the best-selling novel by Lloyd Jones, Mr. Pip is a movie coming from a good place, destined to take you to a bad place.

What [director Andrew Adamson] hasn't been able to do is pull off the story's central narrative shock in a way that preserves its unity rather than splitting it right down the middle.

... has difficulty finding cohesion among its divergent elements.

It's ambitious, it's bloody and it's confusing.

I found this film hard to embrace. Mr Watts is a strange character who seems to create problems for himself when he doesn't need to.

Based on the novel by Lloyd Jones, the film is a visually lush, surprising, moving story that wears its unusual premise with a deftly blended mixture of lyricism and brutality.

It will eventually find a home in classrooms, much like Great Expectations before it. However, I don't expect it to invigorate or inspire kids as Mr. Dickens' work regularly does.

There are no featured audience reviews yet. Click the link below to see what others say about Mr. Pip!