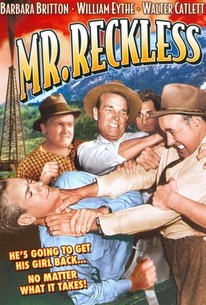 The same week that Pine-Thomas Productions' Speed to Spare was tradeshown in Los Angeles, the company released another of its patented adventure programmers, Mr. Reckless. William Eythe plays the title character, an oil-well digger named Jeff Lundy. Returning to his hometown after a long absence, Jeff is displeased to discover that his sweetheart Betty Denton (Barbara Britton) is engaged to the much-older Jim Halsey (Ian McDonald). Though outwardly philosophical about the whole matter, Jeff concocts several outlandish schemes to win Betty back, most of these hinging upon his daredevil oil-field activities. Walter Catlett and Lloyd Corrigan steal the show with their time-honored mugging and gesticulating.

There are no critic reviews yet for Mr. Reckless. Keep checking Rotten Tomatoes for updates!

There are no featured reviews for Mr. Reckless at this time.