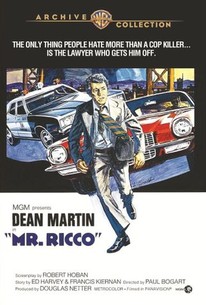 Dean Martin had his final leading role in this obscure drama about a San Francisco lawyer defending a black militant (Thalmus Rasulala) on trial for murder. The familiar supporting cast includes Cindy Williams, Philip Michael Thomas, and Room 222's Denise Nicholas. Filmmaker Paul Bogart, who directed many of the best episodes of the ground-breaking series All in the Family, went on to make Torch Song Trilogy. ~ Robert Firsching, Rovi

Jason Wingreen
as Judge
View All

Mr. Ricco keeps us waiting through two hours of yawn inducing "suspense" for an ending that's totally off the wall.

I couldn't defend this crime film even if I would happen to be the best liberal lawyer in San Francisco.

There are no featured audience reviews yet. Click the link below to see what others say about Mr. Ricco!