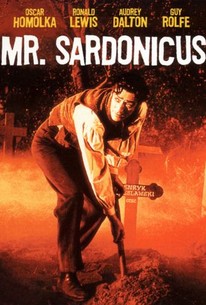 In this 1961 William Castle film based on Ray Russell's novel Sardonicus, Guy Rolfe stars as the wicked Sardonicus, a wealthy count who wears a mask because his face is frozen in a horrifying death grimace. Ronald Lewis stars as Sir Robert Cargrave, a brilliant doctor who is at the top of his field in the early 20th century. A curious letter from his former love, Maude (Audrey Dalton), draws him to Europe where she lives in a remote castle with her brooding husband, his badly scarred, but dedicated man-servant, Krull (Oscar Homolka), and a frightened housekeeper whom Sir Robert finds tied up and covered with leeches. The good doctor soon discovers the truth behind the leeches...and the true nature of his visit when Sardonicus reveals his terrible story: He dug up his father's grave in search of a winning lottery ticket, and upon seeing the corpse, his face muscles froze leaving him looking like a living skull. Dangling Maude as his ransom, Sardonicus forces Sir Robert into attempting a radical treatment to make his face normal again, but even when it is a success, the evil Sardonicus can find no cure from the curse of his father's desecrated corpse. Castle appears in the climax to offer viewers an opportunity to afford additional punishment on Sardonicus which leads to a satisfying conclusion.

Tina Woodward
as The Girl

William Castle
as Narrator
View All

... the make-up is inspired and Oskar Homolka steals the show as the long suffering, whipped-into-submission servant Krull.

Gimmicky, but so typical William Castle with schlocky scares.

Another Film from the William Castle Movie collection. Once ago not a scary movie by today's standards, but might have been when made. Story about a doctor who is called to remove the smile that is stuck on Mr. Sardonicus face that appeared when he dug up the coffin of his late father to recover a winning lottery ticket. Just a good old drive in second feature film. 3 Stars

Again Castle brings us a gimmicky little horror movie, in this one the audience "votes" for the bad guy's fate in the end, which was pretty funny. The story itself, though is more ridiculous than the Tingler, and entirely predictable. This isn't his best work, but it's okay.

Another clever gimmick film from William Castle, Mr. Sardonicus is very much an audience film. It's not about scaring the audiences with electric shocks or skeletons flying over their heads, but more about their participation. Of course, seeing the film today, the participation factor doesn't really exist. As for the movie itself, I wouldn't call it one of Castle's best, but it's certainly interesting and bizarre.

William Castle strikes again with this tale of a Baron whose face is frozen into a monstrous toothy smile out of a fear response to seeing the decaying corpse of his dead father (while robbing his grave of a winning lottery ticket). He hires a doctor to cure him of his affliction. The Baron has of course turned into a psychopath because of his condition. It doesn't help matters that the Baron's wife was previously involved with the doctor, Sir Robert. All kinds of nasty things could have happened. After all, the doctor had a torture chamber in his house. But DID it happen? NOPE. Any potential this film could have had to be spooky or creepy ala Eyes Without a Face is totally wasted here. There's a bit of build-up to the big reveal that makes you think "hmmm...I wonder how creepy he's going to look?" Don't wonder. The reveal is a complete letdown. The climax is anti-climactic, and the twist ending comes across as a bad episode of Twilight Zone. The main thing this film accomplished was to make me want to see Conrad Veidt in the original film of this story -- "The Man Who Laughed". I normally don't expect a lot out of Castle's films except to be entertained in a cheezy silly kind of way. This wasn't even that good.....zzzzzzz