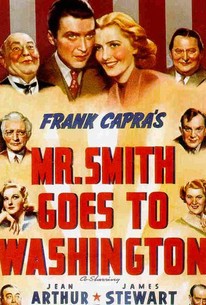 Critics Consensus: Mr. Smith Goes to Washington -- and returns with an uplifting ode to idealism that distills the strengths of its director and leading man.

Critics Consensus: Mr. Smith Goes to Washington -- and returns with an uplifting ode to idealism that distills the strengths of its director and leading man.

Critic Consensus: Mr. Smith Goes to Washington -- and returns with an uplifting ode to idealism that distills the strengths of its director and leading man.

Frank Capra's classic comedy-drama established James Stewart as a lead actor in one of his finest (and most archetypal) roles. The film opens as a succession of reporters shout into telephones announcing the death of Senator Samuel Foley. Senator Joseph Paine (Claude Rains), the state's senior senator, puts in a call to Governor Hubert "Happy" Hopper (Guy Kibbee) reporting the news. Hopper then calls powerful media magnate Jim Taylor (Edward Arnold), who controls the state -- along with the lawmakers. Taylor orders Hopper to appoint an interim senator to fill out Foley's term; Taylor has proposed a pork barrel bill to finance an unneeded dam at Willet Creek, so he warns Hopper he wants a senator who "can't ask any questions or talk out of turn." After having a number of his appointees rejected, at the suggestion of his children Hopper nominates local hero Jefferson Smith (James Stewart), leader of the state's Boy Rangers group. Smith is an innocent, wide-eyed idealist who quotes Jefferson and Lincoln and idolizes Paine, who had known his crusading editor father. In Washington, after a humiliating introduction to the press corps, Smith threatens to resign, but Paine encourages him to stay and work on a bill for a national boy's camp. With the help of his cynical secretary Clarissa Sanders (Jean Arthur), Smith prepares to introduce his boy's camp bill to the Senate. But when he proposes to build the camp on the Willets Creek site, Taylor and Paine force him to drop the measure. Smith discovers Taylor and Paine want the Willets Creek site for graft and he attempts to expose them, but Paine deflects Smith's charges by accusing Smith of stealing money from the boy rangers. Defeated, Smith is ready to depart Washington, but Saunders, whose patriotic zeal has been renewed by Smith, exhorts him to stay and fight. Smith returns to the Senate chamber and, while Taylor musters the media forces in his state to destroy him, Smith engages in a climactic filibuster to speak his piece: "I've got a few things I want to say to this body. I tried to say them once before and I got stopped colder than a mackerel. Well, I'd like to get them said this time, sir. And as a matter of fact, I'm not gonna leave this body until I do get them said." ~ Paul Brenner, Rovi

Harry A. Bailey
as Senator Hammett

Dorothy Comingore
as Woman at Station

June Gittelson
as Woman at Station

James Stewart is the perfect choice for the role of the naive, idealistic Mr. Smith. Under Frank Capra's guidance Stewart turns in the finest performance of his career.

Frank Capra's Mr. Smith Goes to Washington is going to be the big movie explosion of the year, and reviewers are going to think twice and think sourly before they'll want to put it down for the clumsy and irritating thing it is.

Wonderful classic movie for the family.

One of the finest and consistently interesting dramas of the season.

Quintessential Capra - popular wish-fulfilment served up with such fast-talking comic panache that you don't have time to question its cornball idealism.

Mr. Smith Goes to Washington [is] a meaningful social commentary and a delightful bundle of entertainment despite its weaknesses. For that the credit goes to Capra, to Stewart and to Miss Arthur.

Stewart plays his ingenuous, sincere character with finesse, and others, including Beulah Bondi and Harry Carey contribute fine performances. But it's Capra's direction that makes the picture what it is.

No other film is as still relevant and yet sadly out-of-date as Mr Smith Goes To Washington.

From a pure entertainment standpoint, with its depth, substance, and feel-good characters, it's a notable classic that ranks alongside the very best cinema has to offer.

The will of the people is fundamentally manipulable. Democracy is a shouting match.

...Mr. Smith Goes to Washington remains one of the best political films ever made.

Danielle Solzman
Solzy at the Movies
View All Critic Reviews (48)

James Stewart and Jean Arthur are both amazing in this magnificent political drama - a film still relevant when it comes to corruption and our powerless indignation reflected in an idealistic young Senator who boldly demands honor from the ones betraying their vows in Washington.

Frank Capra's tale of an idealistic, yonug junior senator's revelation about, (and subsequent revolution against) Washington's rampant corruption is among his finest (and most typical) works. This film is easily one of the cornerstones for stories about the pure hero standing up for truth, justice, and the little guy, no matter how daunting the opposition and odds of success. It's cliched with how heartwarming and feel good, and unsurprising it all is, but nevertheless is a very great film. Jimmy Stewart cemented his status as a legend his, and this is one of his best and archetypical roles. He really brings the feverish determination of his everyman hero to life and delivers a great guy you can't help but root for. Supporting him are notable names like Jean Arthur, Claude Rains, and Edward Arnold, among others, all of whom deliver some strong performances. The writing is sharp, the direction strong, and the cinematography and editing are pretty top notch, especially for the time. And of course, the message is quite timeless and still relevant. All in all, this is one of the greats. It's overly simplistic, sentimental, and idealistic, but we do need films like this, and I will always defend Capra and his work for this reason, even if I don't want to watch this sort of thing all the time.

I could watch this movie a million times and still get chills when he won't yield. The only film I really feel like deserves a standing ovation when the credits roll.

A classic film, among the all-time best. Perfect and timeless. The ending is one of my all-time favorite movie scenes. Powerful, almost depressing...you forget it's a movie. Jimmy Stewart gives an astounding performance, also one of my favorite performances in a movie. Nominated for 11 Academy Awards including Best Picture, Best Director Frank Capra, and Best Actor James Stewart.