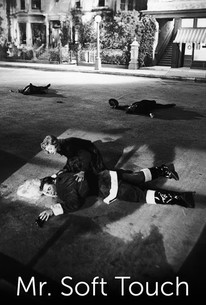 This odd, sometimes whimsical, ultimately violent Damon Runyon-esque story casts Glenn Ford as Joe Miracle, a professional gambler and World War II veteran with several axes to grind against the world. Cheated out of his share of a successful casino operation that he started with his brother -- who was murdered in the bargain -- he pulls off a robbery to get back what he considers his property, $100,000 cash. On the run from the gang he robbed, Joe takes refuge in a settlement house, where he crosses paths with social worker Jenny Jones (Evelyn Keyes). He does really understand her generosity of spirit, or what motivates the others who rely on the settlement house for their food, lodging, and care, but he goes along with it as a dodge to avoid the criminals and police, all of whom are after him. He still cheats the teenage boys who try to gamble with him, and looks for angles that he can work to his advantage, but soon Jenny and her work start getting through to him -- enough so that he wants out, but with her. When he finds out that she's almost willing to compromise her principles for him, Joe realizes that this is getting more serious than he wants it to be. And when ambitious columnist John Ireland gets in the way of his play, Joe suddenly finds himself up to his neck in danger, and the settlement house ablaze. His plans thwarted and his life still in danger, Joe plans on settling out a lot of scores before he leaves this world -- but will his best or his worst side be calling the play?

William Edmunds
as Alex
View All

There are no critic reviews yet for Mr. Soft Touch. Keep checking Rotten Tomatoes for updates!