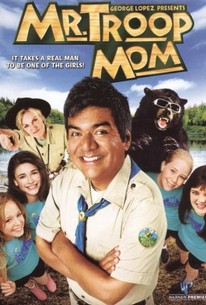 A widower attempting to be both father and mother to his nine year old daughter volunteers to be the chaperone at the Go Girls Jamboree at Running Pines Camp without realizing that he'll be the only guy in a sea of screeching pre-teen girls. Eddie (George Lopez) isn't used to the great outdoors, but that all changes when he heads to camp with his beloved daughter Naomi. Eddie wants to connect with Naomi more than anything in the world, and what better ways for a father and daughter to bond than to scour the forest on a treasure hunt, engage in a seriously competitive game of canoe soccer, and take part in the ultra-slippery slimeball wars? Jane Lynch and Naked Brothers Band heartthrobs Alex and Nat Wolff star in a woodsy comedy for grown ups and kids alike.

If you don't have kids and you don't like movies made specifically for the Nickelodeon and Disney Channel audience, you'll want to skip this one.

...bland and antiseptic but totally without offense.

There are no featured audience reviews yet. Click the link below to see what others say about Mr. Troop Mom!