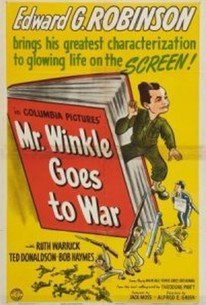 The year is 1942: Mr. Winkle (Edward G. Robinson), a mild-mannered bank clerk, decides to quit his job and open a fix-it shop in his garage. Winkle's wife Amy (Ruth Warrick) disapproves of this, and orders her husband to move into his little shop. Tired of being browbeaten, Winkle is delighted when his draft notice shows up. Fitted for a uniform, Winkle has the wind taken out of his sails in basic training, but soon finds that army life agrees with him; when given a chance to go home when the draft age is lowered to 38, he refuses to do so. Transferred to the South Pacific, Winkle instinctively performs a conspicuous act of bravery. He returns home a much-decorated hero, but he's too shy to partake in the ceremonies in his honor, opting instead to return to his shop, and to his now-loving wife Amy. A tailor-made Edward G. Robinson vehicle, Mr. Winkle Goes to War was adapted by Waldo Salt, George Corey and Louis Solomon from a novel by Theodore Pratt. Watch for Robert Mitchum, Hugh Beaumont and Miss Jeff Donnell in unbilled bits.

There are no featured audience reviews yet. Click the link below to see what others say about Mr. Winkle Goes to War!